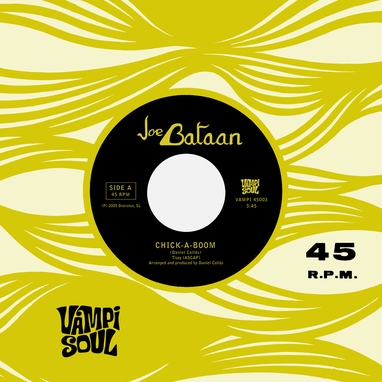 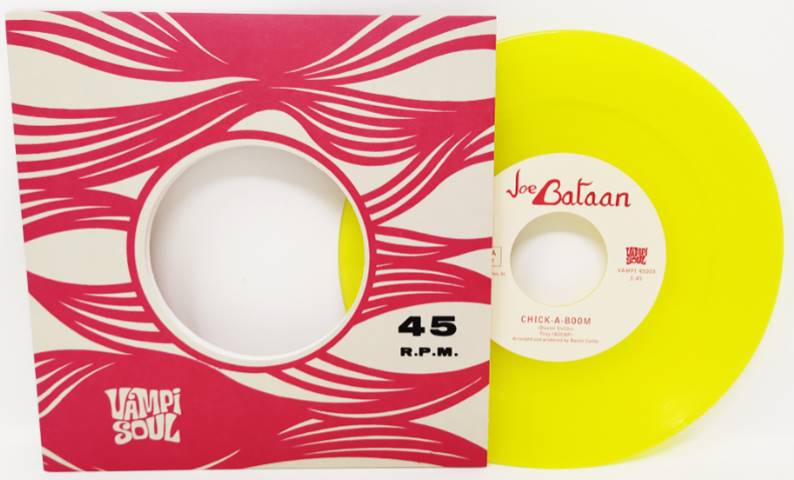 2021 edition of the single that marked the return of Joe Bataan in 2004. A dancefloor favourite by the King of Latin Soul! Yellow color 300 copies limited edition.

Back in 2004, Vampisoul was extremely honoured to play a role in the return to recording of the legendary Joe Bataan, which fully materialized in the lauded 2005 album "Call My Name", written and produced by Daniel Collás. But first came out the preview 45 'Chick-A-Boom' / 'Cycles Of You', which quickly became a DJ favourite and guaranteed dancefloor filler, long out of print until now. Let's hear Collás explain how it all happened: "This whole project grew out of a song called 'Cycles of You', which I had written around 2000-2001 with the guitarist and bassist of my band at the time, Easy. The chord progression and vocal melody really reminded me of Bataan, and it occurred to me that it wouldn't be impossible to get him into the studio to do a guest vocal if we ever recorded it. I had met Bataan a few years before at a small, family-reunion style show at the Nuyorican Poets Cafe in my neighbourhood, where he not only still sounded great, but was also gracious and easy to talk to. "By the time we got around to recording with Easy, the band was about to break up but we still had the studio booked. We all agreed that we didn't want to continue as a band, but at the same time, it would be a shame to never record what we had been working on. Around this time Bataan was playing out again, so I went to the show to see him and find out if he'd be interested in doing some vocals with us. He was agreeable, so we decided to turn it into a Joe Bataan session and do 'Cycles of You'. The funny thing is, 'Chick A Boom', a live favourite with Easy, was hastily added so we could have a B-side, but it ended up chosen to be the A-side of the single."

Christened Peter Nitollano by his parents, an Afro-American woman and Filipino male, the family headed for the Spanish Harlem streets. Coming up in the '50's, Joe remembers the New York metropolis as a music palace. 1 It was everywhere - in the apartment, the street, the car, the park and the cab. Joe: Oh yeah! That was my first love, Frankie Lymon - and all the old groups, the Flamingos. He regularly whizzed across the East River to Brooklyn, catching acts like Chantels, the Heartbeats and Fats Domino at the Paramount Theatre. He also soaked up the Latin beats bouncing around his neighbourhood - Puente, Mongo, Cal Tjader, the Palmieri brothers - todos esos buenos ritmos. Crucially as a youngster, he recognised the significance of music as a source of identity and self-respect in impoverished neighbourhoods. As teenagers, we had a music that was ours, explains Joe. Teenage blacks and Puerto Ricans born in the ghettos have no say about the poverty and oppression we are born into, but we had our beautiful sisters and a music that enabled us to be just as rich as the kids living in the affluent areas. But poverty also brought out a bad streak. He was a street fighter, acquiring a rep as the Afro- Filipino Sugar Ray. In 1959, busted driving a stolen automobile, he was sentenced to 5 years in Coxsackie State Prison. Here, Joe was taught the musical basics: Music was my salvation. It taught me discipline. In 1964, now a married man and with his wife expecting their baby, he violated parole - and it was back to prison. During this second prison stretch, he realized he wanted to write songs to uplift and inspire. Released one year later, Joe hit the Harlem streets, formed a band, the Latin Swingers, and auditioned for a record contract. Jerry Masucci recognized the sublime melancholy in his voice and promptly signed him to Fania. Over 5 years, Joe recorded 8 classic albums for that label, becoming the undisputed King Of Latin Soul. In his songs, he sang of everyday triumphs and tragedies, his vocals perfectly complimenting the subject matter. New York indeed became Joe's town because he sang about that crazy city and it's inhabitants with such affection and sympathy. Gil Scott-Heron once lauded him as the Mayor of the Neighbourhood and even the fiercest critics of Latin soul and boogaloo still venerate his body of work. Joe's amassed such respect because he expressed timeless, tender emotions that affect everyone. And if there's a sadness in Joe's voice and music, it's always balanced by a warmth and sweetness.