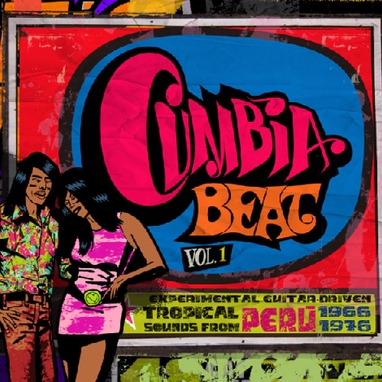 Peruvian cumbia, also know as “chicha”, brings together tropical music styles from Colombia and Cuba, Western influences such as 60s beat and psychedelic rock, and mixes them with indigenous melodies from the Amazonian jungle and traditional Andean songs. The result is a unique and vibrant style of music which reverberates with life. Our compilation includes tracks by the most important bands of the genre. Peruvian cumbia is currently being rediscovered by new audiences and there exists a thriving club and live venue scene in cities like New York, London and Madrid. 36-page booklet with extensive liner notes in English and Spanish plus photos and memorabilia.

Experimental Guitar-driven Tropical Sounds from Peru 1966-1978 In 1960s Peru, a thrilling and unstoppable style of music is born: Peruvian cumbia, also known as “chicha”. Tropical genres such as merengue, guaracha, rumba and cumbia mix with 60s beat and psychedelic rock, while electric guitars reinterpret folk melodies and traditions from the Andes and the Amazonian jungle, in a musical representation of the exodus from rural areas to Lima and other big cities. First volume of a new series dedicated to documenting this most exciting and popular genre. In mid-50s Peru, mambo was progressively replaced by preferences for other rhythms like merengue, guaguancó, cha cha cha, joropo, guaracha, rumba and cumbia, which timidly begins to sound during these years. In Lima it’s the golden age of great orchestras and music ensembles which are capable of playing swing and jazz, but especially the diverse tropical variants inundating the market. The most successful of all, La Sonora de Lucho Macedo, released in 1965 an LP consisting exclusively of cumbia. Around this time, the successful folklore group Los Pacharacos released the album “Los ídolos del pueblo”, which included a cumbia number in the middle of the potpourri of huaynos, waltzes and polkas. The marriage between folklore and cumbia had taken place. The groups preserved the fusion of fox trot and mambo rhythms along with huayno and cumbia in the execution of their music. That feeling would be the basis for the success of such unorthodox and unclassifiable songs as ‘La chichera’ or ‘Petipan’. The recording in 1965 of these two songs by Los Demonios del Mantaro on a seminal 45 rpm with the Sono Radio label was the jumping off point for the birth of cumbia andina, also called “chicha” precisely for this song, which is dedicated to a vendor of the well-known Incan liquor. The electric shock of rock guitars enters the world of cumbia in 1968. The cause of such copulation was Enrique Delgado Montes, regarded as the genre’s godfather. He did it, as part of his band Los Destellos, on a 45 (‘El avispón’ / ‘La malvada’) and an eponymous LP. His songs constitute the most surprising musical fusions and amalgams of the time: whether they merge Cuban music and psychedelia, explore the sounds of Andean or Amazonian music, combine the digitalization of the Creole guitar with huayno melodies or abuse fuzz tones and distortion pedals with enormous strength. The metamorphosis of cumbia turns it into a genre that seems to voraciously cannibalize acoustic traditions and modern technologies. There wasn’t an innovation that tropical guitarists didn’t add to their sound: delay, fuzz tone, overdrive, wahwah, reverb, modulating effects typical of rock bands are assimilated into a stunning sonic cocktail. In this context, cumbia reached the top of the charts in popularity. Cumbia replaced rock as the urban sound. The groups would slowly develop an ethnic sensibility inspired by native Shipibo motifs and an astonishing and bewitching sound that seemed to drink from all the mysteries, secrets and myths of the jungle.