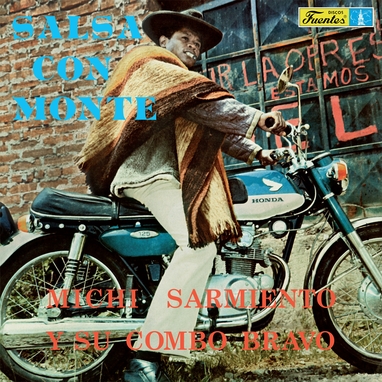 Vampisoul is thrilled to present the latest facsimile LP in our Discos Fuentes reissue series, an instant tropical Latin dance party from Blas Michi Sarmiento. Honestly, it was hard to choose which Michi y Sus Bravos album to reissue, they’re all so good. But we took a poll with fans and DJs, and his sixth LP Salsa Con Monte (1973) came up with the most votes, though it was a close race and any one of them could have easily been substituted. El Michi, as his grandmother nicknamed him after a cute little pig of the same name, is the son of the famous reedman Clímaco Sarmiento, a bandleader and session ace in his own right who recorded with Fuentes for decades. Michi was a musically gifted child prodigy who grew up in the historic Colombian coastal port city of Cartagena. Proficient in percussion and singing from an early age, he is most well known for following in his father’s footsteps with clarinet, saxophone, composition and musical arranging as his signature skills. At 17 Michi had his own band and by 1967 his Bravos (literally braves, or tough guys) were competing with local sound systems and radio stations that were playing the new generation of Latin records from New York, Caracas and San Juan, namely salsa, descarga, charanga and boogaloo. While Sarmiento has consistently maintained his love of traditional Afro-Colombian rooted música costeña to this day (porro, cumbia, cumbelé, gaita, paseo and merecumbé), Los Bravos always played it hard, loose and fast, just like their salsa and boogaloo – they had to be tough and diverse because they had to compete with the DJs and so Michi preferred recording live in the studio with the result being an accurate document of what a powerful outfit they must have been to experience in person (as Fruko did in 1970, inspiring him in part to form his own salsa band, Los Tesos). This album contains a number of excellent cover tunes, with the rather surprising choice of Brazilian tropicalista bard Gilberto Gil’s 1967 hit ‘Viramundo’ kicking off side A. Next up is the heavy duty guanguancó ‘Se apagó’ (an original by one of Michi’s vocalists, Joe Hurtado) followed in quick succession by a dizzyingly diverse gaggle of genres, namely cumbelé, calypso, pasebol, cumbión and rumba (a cover of ‘La rumba se acabó’ by The New Swing Sextet) – and that’s just side A! Side B starts with the title tune, a pumping jam session descarga with a rousing riff (tumbao) that ably competes with any hot Nuyorican number of the time from Willie Colón or Ray Barretto. The rest of the wax is equally fevered, with a nice version of Justi Barreto’s ‘Olaya’ (first made famous by La Playa Sextet in 1967) followed by a spicy serving of some upbeat tropical fare from the coast, namely the gaita ‘Rosy’ and the paseo ‘Me engañaste’ (sung by Felipe Sambergman Jr). The album closes with a cover of Puerto Rican singer Chivirico Dávila’s double entendre plena-bomba, ‘La casa del jabonero’, a hit for Chivirico in 1968 with bandleader Joe Cotto, but done here as an infectiously bouncy pambiche style Dominican merengue. One could truly say Michi and his band of braves bring us quite a heavy load of salsa mounted on this record (Salsa con monte referring to Michi’s motorbike mount on the cover), enough to put a tiger in your tank, pizazz in your poncho, light your cigar and make you jump for joy, which is exactly what’s happening by the look of the front and back jackets of this classic Discos Fuentes LP. Pablo Yglesias aka DJ Bongohead

Sarmiento and his band were always experimenting with fusions, but it's clear that by the late 60s, Latin music coming from New York and other hot spots like San Juan, Lima and Caracas had taken hold and transformed indigenous costeño styles permanently, and Michi and his 'bravos' were in the forefront of this cultural shift.