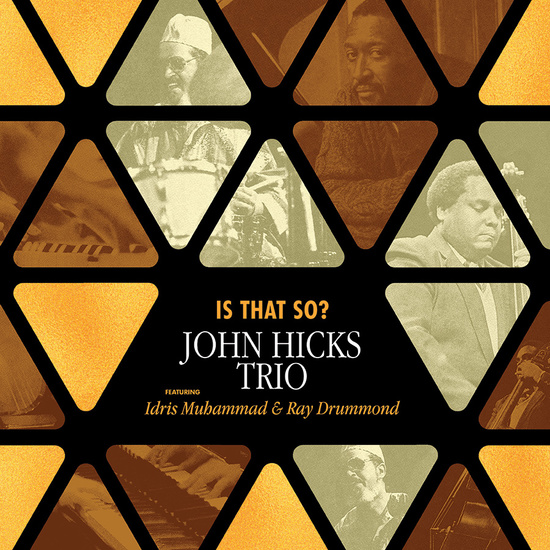 John Hicks Trio, Is That So?

In the late 1980s, the renowned American jazz pianist, composer, and arranger John Hicks formed one of the most influential ensembles consisting out of musicians that had played music at the highest level all their lives and gained their status as both stand-alone artists and important sidemen. Each of them had participated in many of jazz’s great moments and all shared the ability, documented on many albums, to inspire their fellow musicians to even greater heights. The ‘John Hicks Trio’ had several line-up changes over the years that included greats such as Clifford Barbaro (Strata East, Blue Note, Sun Ra Arkestra, Charles Tolliver), Clint Houston (Prestige, Nina Simone, Roy Ayers, Azar Lawrence), Curtis Lundy (Pharoah Sanders, Frank Morgan, Cole Porter), Marcus McLaurine (Muse, Verve, Weldon Irvine, Kool & The Gang) and Victor Lewis (Steve Grossman, Stan Getz, Charles Mingus, Cedar Walton, Chet Baker).

On the album we are presenting you today (Is That So? from 1991) the trio consists out of some of the biggest and best players in the jazz, funk and soul scenes:

On piano we have the Atlanta based trio’s bandleader JOHN HICKS (1941-2006). He served as a leader on more than 30 albums and played as a sideman on more than 300 other recordings. After being taught piano by his mother, Hicks went on to study at Lincoln University of Missouri, Berklee College of Music, and the Julliard School. After playing with a number of different artists during the early ’60s (including Oliver Nelson and being part of Pharoah Sanders’s first band) he joined Art Blakey & The Jazz Messengers in 1964. In the early ’70s he taught jazz history and improvisation at Southern Illinois University before resuming his career as a recording artist. Next to his many solo recordings for labels such as Strata East and Concord, Hicks would collaborate with all the big names in the scene, including Archie Shepp, Alvin Queen, Mingus and Curtis Lundy. In 2014 & 2015, J Dilla payed homage to John Hicks by sampling two of his songs.

On drums we have the legendary IDRIS MUHAMMAD (1939-2014) who to this day is still considered as one of the most influential drummers covering a multitude of genre-transcending styles. Born in New Orleans, he showed early talent as a percussionist and began his professional career while still a teenager, playing on Fats Domino’s ‘Blueberry Hill’. He then toured with Sam Cooke and would later go on to work with Curtis Mayfield. Next to his landmark solo recordings for Prestige Records, Idris would collaborate with iconic musicians and acts from the likes of Pharoah Sanders, Manu Dibango, Ahmad Jamal, Melvin Sparks, Charles Earland, Walter Bishop, Ceasar Frazier, Roberta Flack, Gato Barbieri, Nathan Davis, Sonny Rollins, Lou Donaldson, Galt MacDermot, Lonnie Smith…and countless others. Idris Muhammad’s work was sampled by renowned performers such as Drake, Beastie Boys and Fatboy Slim.

On bass we have RAY DRUMMOND (born 1946) who originated from Massachusetts. Drummond was a well-respected bass player (and a master of his instrument), composer, arranger, bandleader, educator and producer who was part of performances and recordings of renowned acts and artists such as Pharoah Sanders, Horace Tapscott, Art Farmer, George Coleman, Leon Thomas, Johnny Lytle, Freddie Hubbard, John Hicks, Houston Person, Toots Thielemans, Lalo Schifrin, Art Blakey…and many others!

The ‘Is That So?’ album was recorded at the legendary Studio 44 (Holland) in July 1990 and released on the Dutch label TIMELESS in 1991. On this amazing piece of work you’ll find ten majestic tracks (including an excellent Sonny Rollins cover-tune). The album was produced by John Hicks and Timeless Records owner Wim Wigt and is a remarkable outing of advanced musicianship by three jazz-giants in their prime, delivering an inspirational gem of an album. Is That So? sounds as successful, young and vibrant as ever! Expect supercharged Post Bop with striking notes, no-holds-barred musicianship, high swinging solos, screaming choruses and plenty of solid virtuosity to spare. The up tempo none stop Latin beat is complimented by the terrific drum solos of Idris Muhammad and the rhythmic bass stokes of Ray Drummond. This electrifying set of tracks makes this release a bonafide hit and a must have for any self-respecting jazz fan or collector.

Tidal Waves Music now proudly presents the FIRST ever vinyl release (these recordings were never issued on vinyl before) of John Hicks Trio “Is That So?”. This unique album comes as a deluxe 180g DOUBLE vinyl edition (strictly limited to 1000 copies worldwide) with obi strip. The jacket features exclusive pictures shot by legendary Dutch photographer Joost Leijen (known for his work with artists such as Chet Baker and Pharoah Sanders), also included is an insert with liner notes by renowned author and producer Russ Musto. This is also the FIRST time Is that So? is being released in North America and in the UK. Released exclusively for Record Store Day Black Friday 2021 and available in participating stores on November 26, 2021.