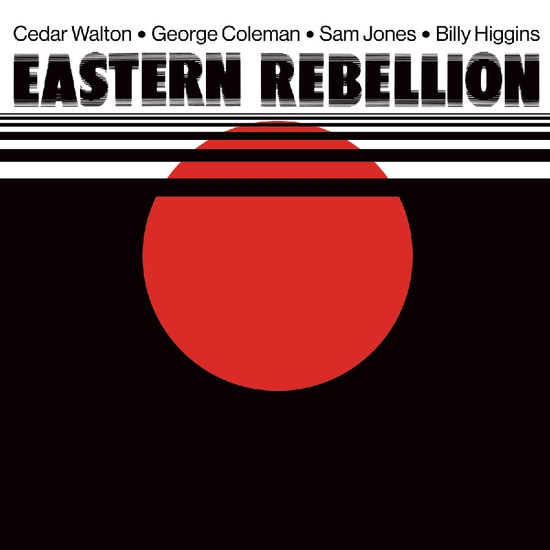 All-Star players team up on this classic Jazz collaboration

In 1975, four legends teamed up and gave birth to one of THE best rhythm groups of the 1970s…four musicians that had played music at the highest level all their lives and gained their status as both stand-alone artists and important sidemen. Each of them had participated in many of jazz’s great moments and all four shared the ability, documented on many albums, to inspire their fellow musicians to even greater heights. In 1975, the EASTERN REBELLION collective was born.

On saxophone, we have GEORGE COLEMAN (born in 1935) the self-taught saxophone maestro from Memphis who (after working with Ray Charles) played in B.B. King’s band in the 1950s and in Miles Davis’ quintet in the 1960s. Coleman played on four historical Miles albums (including ‘My Funny Valentine’) within one year. George Coleman went on to perform and record with legends such as Charles Mingus, Ahmad Jamal, Idris Muhammad, Melvin Sparks, Nina Simone…and was an essential member of many more noteworthy groups throughout his freelance career. He was named a NEA Jazz Master, inducted into the Memphis Music Hall of Fame in 2015 and received a brass note on the Beale Street Walk of Fame

On the piano, we have CEDAR WALTON (1934-2013) who was also the bandleader & producer of the Eastern Rebellion collective. He was a Dallas-born Hard bop jazz pianist virtuoso who came to prominence as a member of Art Blakey’s The Jazz Messengers before establishing a long career as a bandleader, arranger and composer (several of his compositions have by now become much-played jazz standards). Walton was known for his fantastic recordings and performances and of course for being part of the in-house rhythm section at Prestige Records. Cedar Walton arranged and recorded for Etta James, helping her win a Grammy Award for Best Jazz Vocal Album in 1994.

On bass, we have SAM JONES (1924-1981) who originated from Florida, but his career primarily revolved around the New York City Jazz scene. Jones was a well-respected bass player (and since the 1950s regarded without reservation as THE master of his instrument), cellist and composer who was part of performances and recordings of renowned acts and artists such as Dizzy Gillespie, Chet Baker, Duke Ellington, Thelonious Monk…and many others for key-labels such as Blue Note, Strata East and Prestige.

On drums, we have BILLY HIGGINS (1936-2001) one of the in-house drummers for Blue Note and a well-known Hard bop & Post-bop freelancer who played on Ornette Coleman’s first records. Higgins played and recorded with greats such as John Coltrane, Wayne Shorter, Donald Byrd, Steve Grossman, Herbie Hancock, Sonny Rollins, Milt Jackson, Pharoah Sanders, Max Roach, Freddie Hubbard, Toots Thielemans & Sun Ra…listing them all would be futile because in his career Billy Higgins played on over 700 recordings, transcending most genres.

The Eastern Rebellion album was recorded in New York City in December 1975 and released on the Dutch label TIMELESS in 1976. Timeless was (and is) ran by Ria and Wim Wigt who are patrons of the arts and very close with key jazz musicians around the globe…this was an important album for Timeless because it would become their first-ever release. Now 45 years later, the label is still standing strong after a long and prosperous career of releasing top recordings from all THE big names within the jazz genre.

On Eastern Rebellion (Vol.1) you’ll find four band-penned originals and an excellent John Coltrane cover-tune. The album was produced by Cedar Walton and Wim Wigt and is a remarkable outing of advanced musicianship by four jazz giants in their prime, delivering a gem containing five inspired and straight-ahead tracks. Three more volumes (depicting the same front-cover artwork) of the Eastern Rebellion jazz collective would follow between 1976 and 1984, and later another four on different labels (between 1992 and 1994). Some of those (at different times) would also feature other remarkable jazz players, but all albums included the winning Walton-Higgins combination.

Tidal Waves Music now proudly presents the 45th-anniversary vinyl reissue of this historical and collectible album. Originally released in 1976, and out of print on vinyl since its last pressing back in 1985, these classic recordings are now finally back available as a limited 180g vinyl edition (500 copies) complete with the iconic original artwork & photography by Martin Bough.