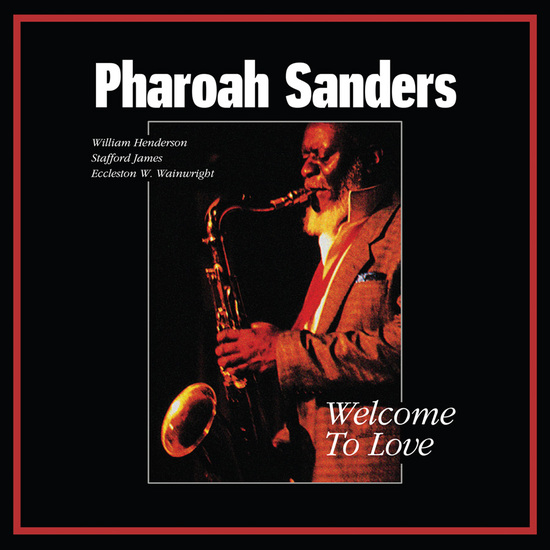 You Don't Know What Love Is

The Nearness Of You

My One And Only Love

I Want To Talk About You

Nancy (With The Laughing Face)

Say It (Over And Over Again)

Comes with Japanese bonus track from the same session

Pharoah ‘Farrell’ Sanders (born 1940) is a leading figure in the world of jazz and one of the last living legends with connections to players like Sun Ra and John Coltrane. His tenor saxophone playing has earned him royal status amongst free jazz players, critics and collectors.

On this (harder to find) album we are presenting you today (Welcome to Love) you’ll find sublime French recordings (recorded in 1990-released in 1991). Here, Sanders plays with an all-star line-up consisting of Stafford James (Sun Ra) on bass, William Henderson (Roy Ayers) on piano & Eccleston W. Wainwright on drums. On Welcome to Love, the master saxophonist plays straight-up jazz, and the result is a gorgeous collection of ballads where you can really feel Sanders’ enormous self-reflection and homesickness. Sanders is famous for getting sounds out of his sax that no else can, but on these recordings he treats the songs with reverent lyricism on both tenor and soprano…each song is infused with a subtle emotional quality that simply does not let go.

Hailed as Sanders’ finest albums from his re-thinking period, in many ways, the album is a tribute to Coltrane’s Ballads album of 1961 but with Pharoah’s print marked all over it. Here the listener explores the gentler side of Pharoah Sanders…a jazz giant who is communicating subtly and serenely. His incredible technique is displayed not in furious runs but in exquisite note choices, the mark of the outstanding communicator as demonstrated in the art of the ballad. Sanders communicates with a warmth and tonal center that is unusual among present players and compares favorably to the many soprano sax greats that have preceded him.

Welcome to Love is an ideal introduction to Sanders and a stepping-stone to the saxophonist’s more inventive, spiritual pieces. If you’re more familiar with Sanders’ spiritual avant-garde works and not aware of this one, you’ll be plenty surprised with the fabulous sound represented here.

Tidal Waves Music proudly presents the FIRST EVER VINYL RELEASE of this essential album, up till now these recordings were only issued as a Compact Disc in 1991. Now finally available as a deluxe 180g DOUBLE LP set and also comes with an extra bonus track (from the same sessions) that was only featured on the Japanese CD version. This vinyl release is limited to 500 copies worldwide and comes with an obi strip.