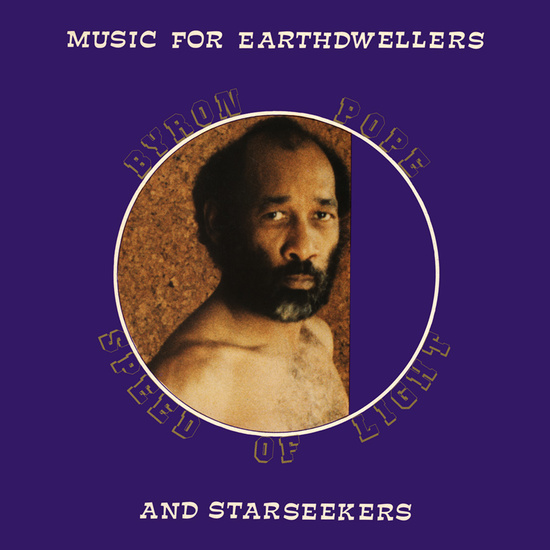 Byron Pope Speed Of Light, Music For Earthdwellers And Starseekers

Music For Earthdwellers And Starseekers

Alto saxophonist Byron Herman Pope (born 1934) might be a rather unsung name on the bill despite being part of the avant-garde jazz circuit for more than half a century. Deeply committed to the ideas of John Coltrane, he has played with Alan Silva and Sunny Murray but only recorded sporadically over the course of his long career.

Coming from a musical family: Byron’s father was the band leader of his own orchestra and was a writer for Billie Holiday, his uncle Lee was the tenor sax player with Eddie ‘Cleanhead’ Vinson (until he retired & was replaced by a young man named John Coltrane) and his cousin was Darlene Love, the famous R&R Hall Of Fame singer/actress who was married to Phil Spector and godmother to Whitney Houston.

Growing up in a segregated Monroe-Louisiana in the 1940’s, at the age of 12, Byron Pope was exposed to concerts by African American bands at his high school…this became his principal motivation to become a musician himself. At the age of 19, Byron came to Germany as a US military serviceman…after two and a half years he returned to the States but was not able to accept the racism and political climate in his home country anymore.

After accumulating three professorships as a jazz teacher (including the title of professor in Jazz and Blues at University of Washington, Seattle in 1968) in the early Seventies Byron crossed the ocean again, this time he went to France. Here he met (and started performing with) the legendary Burton Greene and became friends with main players from the likes of Georges-Edouard Nouel and Chris Henderson.

Throughout his long career Byron kept close friendships with famous jazz and blues players including Sun Ra and John Coltrane (Coltrane wanted to record his song “This Way” but unfortunately passed away before he could do it). Byron Pope was a member of the Alan Silva Orchestra from 1972 to 1976, later he went on to play with Sunny Murray on a regular basis. Byron eventually settled in Geneva where he has lived ever since…dividing his time between his family, his love for spiritual yoga and his musical career.

Byron Pope’s 1982 LP Music For Earthdwellers And Starseekers (recorded at Studio Caroline, Paris) is a sublime modal jazz record with a nice cosmic spiritual touch. Enlisting a superb all-star line-up including Georges-Edouard Nouel on piano, Roger Raspail (Kassav) on percussion and Chris Henderson (Sun Ra) on drums. To top things off, the album was engineered by the legendary Jean-Philippe Bonichon (who later on went to become the engineer responsible for many of the early remixes of Dimitri From Paris).

This is absolutely top-drawer material with superb grooves that astral travelers are looking for. The three percussionists unlock rhythms that move your bones and bring alive new levels of consciousness…pure raw cosmic energy turned into vibrations and notes at the speed of light.

Today we are proud to present to you the first ever vinyl reissue of this rare album (original copies tend to go for large amounts since only 1000 copies were pressed upon its release in 1982). This reissue is now available as a deluxe 180g vinyl edition (limited to 500 copies) featuring the original artwork and also comes with an insert containing pictures and liner notes.