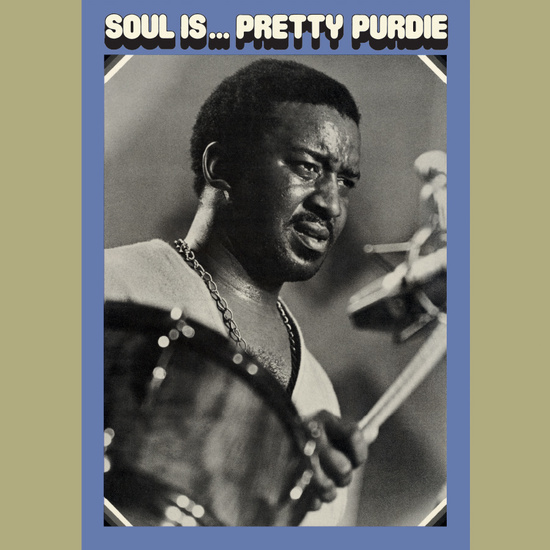 Comes packaged in a gatefold jacket

Bernard “Pretty” Purdie is an American drummer that needs little introduction. At an early age, he began hitting cans with sticks and learned the elements of drumming techniques from overhearing lessons being given. Considered an influential and innovative soul-jazz-funk musician, he is known for his precise musical timekeeping and his signature/unique drumming techniques… considered one of the greatest drummers of his generation, in 2013 he was inducted into the ‘Modern Drummer’ Hall of Fame.

In 1961 he moved from his hometown to New York City where he was contracted to play session work for James Brown (Purdie can be heard on the albums ‘It’s a Man’s Man’s Man’s World’, ‘Cold Sweat’, ‘Say It Loud-I’m Black and I’m Proud’ and ‘Get on the Good Foot’). These JB sessions display some of the most sophisticated and driving shuffles ever recorded for Brown’s catalogue. Purdie then started working with Aretha Franklin as her musical director in 1970 and held that position for five years as well as drumming for Franklin’s opening act, King Curtis. Bernie Purdie was credited on countless albums (spanning several decades) by legendary artists like Nina Simone, Herbie Hancock, Isaac Hayes, Quincy Jones, Miles Davis, John Lee Hooker, Steely Dan, Cat Stevens, B.B. King, The Rolling Stones and Gil Scott-Heron.

Purdie recorded his first solo album Soul Drums as early as 1968 and other milestone solo albums include Purdie Good (1971), Soul Is … Pretty Purdie (1972) and the soundtrack for the blaxploitation film Lialeh (1973). With such an extensive body of work (Purdie laid down the beat on over 3000 recordings) it comes as no surprise that his rhythms have appeared as samples on groundbreaking tracks from high profile acts such as The Chemical Brothers, Massive Attack, Beck, DJ Shadow, The Prodigy …and many others.

Today we are extremely proud to present you the official reissue of Mr. Purdie’s long time out of print 1972 classic: Soul Is … Pretty Purdie. The album (featuring an all-star lineup of guest musicians) is a fantastic mix of Purdie’s own material and cover versions of classics by Aretha Franklin, Marvin Gaye & Bill Withers. The rhythm section, wah-wah guitars and growling horns constantly supply the funk for this uber funky jam while a probing bass and Pretty Purdie’s trademark beat helps showcase his considerable talents on this career-defining album. Purdie’s rasping, a world-weary vocal which is full of hurt and hope lifts the album up to unseen heights. Washes of dramatic Hammond organ stabs of keyboards and pounding drums grab your attention. It’s as if Pretty Purdie’s all-stars are determined to surpass everything that’s gone before. Melodic and joyous, you can’t help lose yourself in a band at the top of their game.