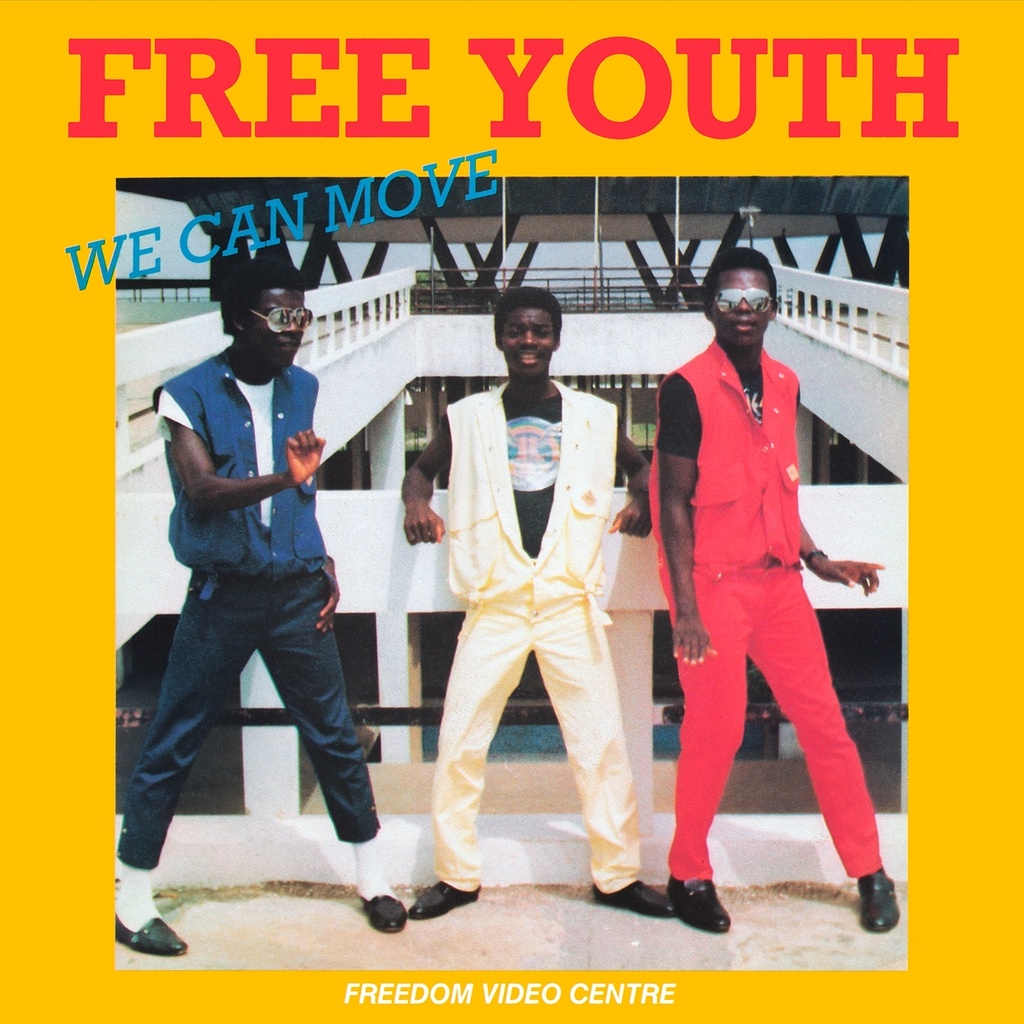 Free Youth, We Can Move

Soundway Records reissues Free Youth’s long sought-after 1985 single “We Can Move”, one of the first known examples of Ghanaian hip hop, emerging at the dawn of ‘hip-life’ (hip hop meets highlife). It was the trio’s only release and originally pressed on 7" vinyl, but now comes fully restored, remastered and available for the first time on 12” vinyl along with the original cover art.

Free Youth comprised three main members: brothers Terry “Sir Robot” Bright and Abednego “King Abed” Ayim Bright, and their friend Lenny “Nii Addy” Dimple. Around the early 80s they began regularly dancing and singing at clubs and parties in Accra, with other dancers occasionally joining them on stage – including one Reggie Rockstone, who later went on to find commercial success. Catching up in London, where two of them live now, Abed recalls that Rockstone would sometimes borrow outfits from them to dance in. Lenny pipes up: “He’s still got my red trousers, man!” (as seen on the front cover of the single We Can Move).

Although Rockstone was credited with being one of the pioneers of the hip-life genre in the mid 90s, its roots in Ghanaian hip-hop can be traced back nearly 10 years earlier with Free Youth’s single, as well as with highlife stars such as K. K. Kabobo and Gyedu-Blay Ambolley experimenting with semi-rap lyrics.

As American culture spread rapidly throughout Ghana in the 80s, genres such as disco, funk and hip hop influenced local artists. For Free Youth, they looked to Shalamar, Kool & The Gang, Cameo, Sugarhill Gang and Rick James for inspiration in their music and dancing.

By 1985, Terry had already placed 2nd in a major Ghanaian dance competition and Free Youth were beginning to make a name for themselves as an entertainment group. “We let it rip. Full stop”, laughs Abed. The buzz around the band caught the attention of George Alhassan, who offered to help them release their music as their executive producer.

Lenny and Abed, then 22 years old, and 19-year old Terry were invited by Alhassan to Ghana Films Studios to record. Without having written down any music, the group sang the parts and beatboxed the rhythms to the hired session musicians prior to recording. Out of this session came numerous tracks, including “We Can Move”, a blend of hip-hop and Afro-funk, with a proto disco-boogie beat, punchy trumpet riffs and melodic rapping. It was selected as the lead track for their first 7” single, with the B side to feature an advertising jingle for Freedom Video Centre, a business associated with their executive producer.

Following this, the trio donned their best performance outfits and posed for a band photo at Ghana Trade Fair Centre in Labadi, Accra – which was adopted as the cover art for the single (Terry – left, Abed – centre, Lenny – right).

With audio and artwork ready, Alhassan convinced Free Youth to send the master tape of their session to the Netherlands, where it was given to a reggae producer who had been introduced via Sidiku Buari. They had high hopes that they were bound for a major record deal, but unfortunately it was from there that the group’s luck took a turn for the worse. They recall that when they began to ask what deal they were being offered, they only received excuses and stalling from Alhassan. The group eventually fell out with him and never saw income for the release.

Not long after, they learned that 2,000 copies of the 7” had been pressed and were being sold out of the Netherlands. The single was never distributed or released for sale in their home country of Ghana, nor did any of the band members lay their hands on a copy. With a wistful look, Lenny reflects: “I think our song was played only once on the radio, before a football match.”

The master tape was eventually arranged to be sent back to Ghana. On it were a number of other songs they had recorded, including “World of Exams”, “Happy Birthday”, “I Knew The Girl” and “Oh Baby” – rapping about topics their teenage fans would relate to. But to add further misery, the tape was reportedly badly damaged during an airport search – leaving only “We Can Move” and “Freedom Video Centre” intact.

Disheartened by the process, Free Youth disbanded, never to record together again. Lenny and Abed moved to London, with Lenny joining the American Air Force based out of Heathrow for 20 years. Abed pursued a career at the London Underground working on railway track maintenance, while also practising as a priest. His younger brother Terry continued the trio’s legacy and became an assistant lecturer in dance at the University of Ghana, where he remains to this day. Their excitement in the lead up to the reissue is palpable: “The show must go on!” exclaims Lenny.

With the original track “We Can Move” fully restored and remastered, as well as an instrumental cover version from Welsh group Drymbago (replacing the original B side), Soundway Records is pleased to deliver Free Youth the release that they were after, 34 years later.