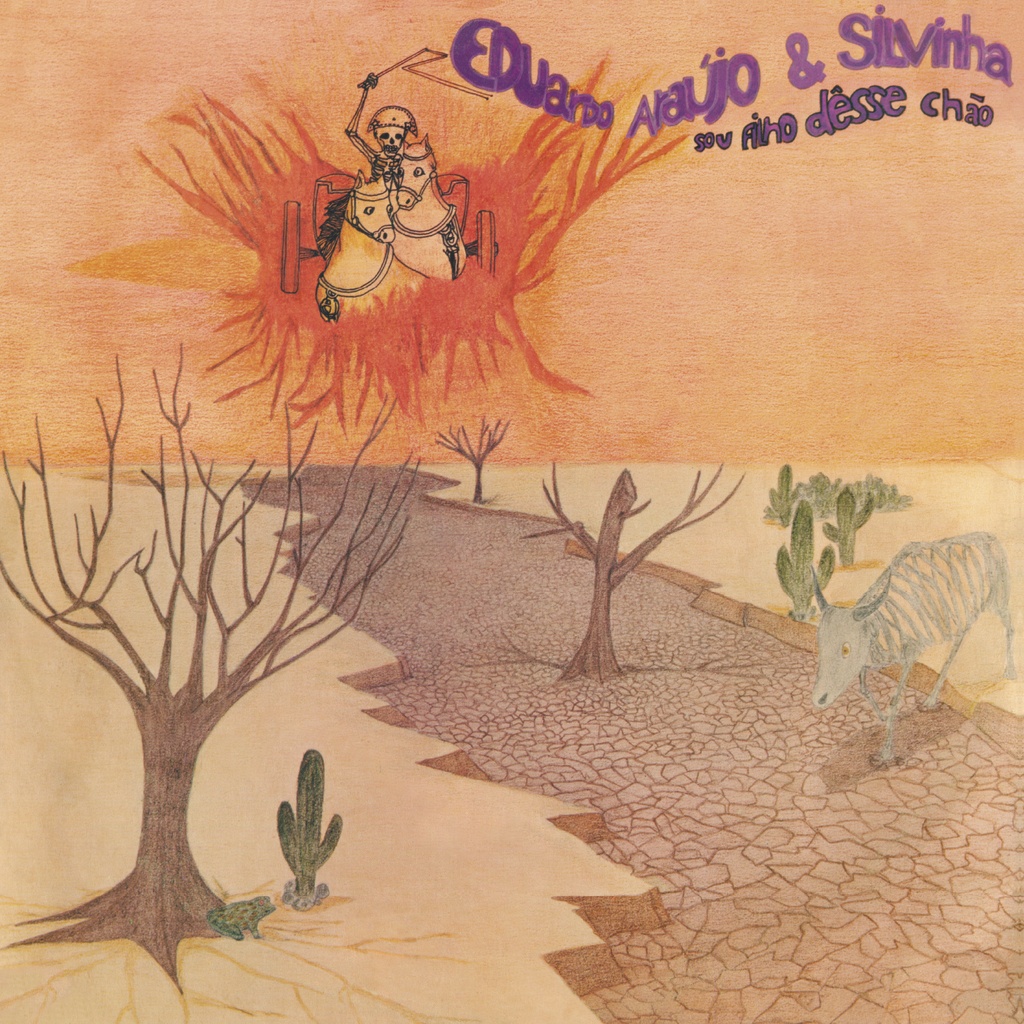 SIDE A
A1. Sou Filho Deste Chão
A2. Círculo Vicioso
A3. Girassol
A4. Capoeira
A5. O Tempo Que Esse Tempo Tem
SIDE B
B1. Manda Embora A Tristeza
B2. Misturando Rock Com Baião
B3. Ter O Que Eu Tenho Sem Você
B4. Capoeira
B5. Opanigê

In his own words, Eduardo Araújo stated in 1976: ‘Our musical philosophy remains the same: mixing rock and northeastern music to make a universal sound’.

It is curious to observe the aesthetic changes that Eduardo Araújo underwent until he reached the cult sound of this 1976 album: Echoes of SANTANA, TIM MAIA, LUIZ GONZAGA and EMERSON, LAKE & PALMER in an album that was released independently at the time and, until today, never re-released.

The original release of "Sou Filho Desse Chão" in 1976 was made totally independent by Eduardo Araújo himself, with total lack of commercial distribution, remaining obscure from music charts and later rediscovered acquiring a well-deserved status of rare gem for music collectors.

Eduardo Araújo is a Brazilian singer owner of a bold but also incredible high note voice; and his duo singer Silvinha, owner of a great soulful voice, having both been very known to main public and successful in their careers across various music styles from the 60´s, 70´s and 80´s in Brazil. Araújo reached fame when still young in the early sixties with the massive hit "O Bom" in the Brazilian movement of "Jovem Guarda", along with his fellow companions ERASMO CARLOS and TIM MAIA, who were also young with success to come.

Eduardo Araújo & Silvinha married in the late sixties and partnered in life and music, sometime having recorded both in solo and duo albums, always in the music spotlight for their talent and also surrounded by great musicians.

After his successful debut, Eduardo Araújo introduced soul music in Brazil with the album "A Onda é Boogaloo" in 1968, produced by TIM MAIA.

In the 1972, Eduardo Araújo released the first Brazilian record recorded in 24 tracks, "Kizumbau", which brought many innovations and is very known for his particular style of combining funk rock with Brazilian regional rhythms.

In 1975, Eduardo Araújo made a conceptual album into the roots of rock and roll called "Pelos Caminhos do Rock", which opened a door to reach more hard rock bands from the decade, influenced by STEPPENWOLF and CREEDENCE CLEARWATER REVIVAL.

For 1976 album, Eduardo Araújo wanted to dive into Brazilian culture, so he travelled to Salvador, Bahia and was presented to capoeira and candomblé, two Brazilian cultures originated from the African Brazilian community since the colony period, to develop his new album "Sou Filho Desse Chão", now in his brand new owned 8 channel studio facility.

Eduardo Araujo brought a dream team of musicians, naming Dirceu, drummer from TROPICALIA and first drummer from the OS MUTANTES album; Luciano Souza "Luguita", guitarist legend who mentored famous guitarists such as Pepeu Gomes from NOVOS BAIANOS and played with ARNAUD RODRIGUES and SOM NOSSO; Valdecir on bass, from BLACK RIO, the influential band leading movement of Black Music from Rio de Janeiro; and sanfonista DOMINGUINHOS, the most famous disciple of LUIZ GONZAGA.

The album cover was also not conventional for the market by Eduardo´s choice: he wanted to show the real picture of the hot, dry and arid Brazilian "sertão", dramatically portraited in the drawing with the brutal skeleton riding it´s chivalry from fire. As Eduardo Araújo explained in 1976: ‘Our musical philosophy remains the same: mixing rock and northeastern music to make a universal sound’.

Eduardo Araújo has one of the most long and successful careers in Brazilian music, having started from rock´n´roll and soul in the sixties, going to psychedelic, funk rock in the seventies, and later established his roots in country music.