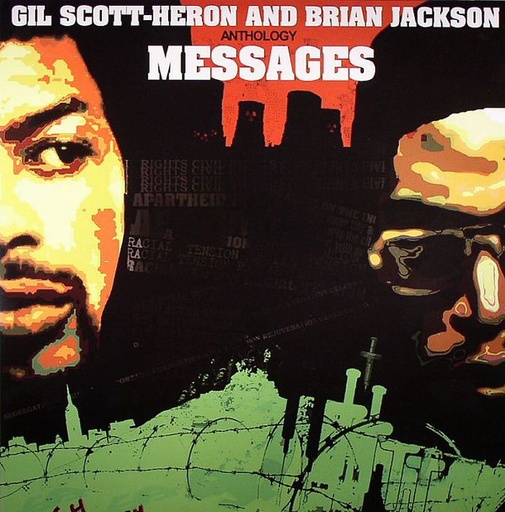 Gil Scott Heron is justifiably recognised as one of the most unique black music artists of all time. His music transgresses all musical barriers in the same way that Stevie Wonder, Bob Marley and Marvin Gaye did. Along with his song writing partner, MD and co-producer Brian Jackson he recorded some of the most memorable songs of the 1970’s, songs which combined a message with powerful rhythms. They brought to our attention issues that most other recording artists and the media chose to overlook. Their songs always gave food for thought to the listener in the same way their contemporaries Marvin Gaye (What’s Going On) and Curtis Mayfield (There’s No Place Like America Today). What sets Gil and Brian aside from the others is they continued their quest to inform throughout the decade, during which time the beat became more important than lyrics in the more general world of soul music.

Despite their success, they maintained humility and down to earthiness that many of their contemporaries should have aspired to. I was fortunate to witness their first gig in the UK at Victoria Apollo in 1981. After the gig the whole band sat on the edge of the stage and talked to the audience, at a time when many other artists were too caught up with their own egos and excesses to give time to their fans.

This anthology covers the period from 1973-80 an extraordinary creative period for Gil and Brian during which they recorded seven great albums where this material is taken from. Prior to this Gil had met Brian at Lincoln University in Pennsylvania and recorded three albums for Bob Thiele’s Flying Dutchman label, his debut ‘A New Black Poet’ (all poetry), ‘Free Will’ (half Poetry/half music) and the classic ‘Pieces Of A Man’ an essential for any collection. In 1973 Gil and Brian wanted more freedom to develop their music and they recorded the ‘Winter In America’ album for the collective label Strata East. The following year they became the first artists to sign to Clive Davis’ fledgling Arista label, ‘First Minute Of A New Day’ being the first album released on that label.

The songs contained in this anthology explore issues ranging from Racism, Nuclear Power, Substance Abuse, Over Commercialism, Slavery, Illegal Immigration and Oppression to their experiences on the road. Regrettably many of the topics covered are still issues 30 years on. All the tracks on the anthology have been re-mastered and sound even fresher than ever. On to the songs…

‘The Bottle’ taken from ‘Winter In America’ became a hit in the USA and an underground club hit in the UK, initially within the ‘Northern Soul’ scene, and then later on in the ‘Jazz Funk’ era. It is an infectious pulsating floor-filler that crosses all sub-genres and is justifiably considered a classic having retained its popularity for over 30 years. ‘Johannesburg’ showed Gil had his finger on the pulse with what was about to happen in South Africa, having been recorded two years before the Sowetto riots that highlighted to the world the oppression of the regime that existed. ‘Winter in America’ is a haunting piece of music reflecting American society, lyrics that could apply to much of the world today. ‘The Liberation’ is an often overlooked track with a great groove showing the power of the Midnight Band the nine piece ensemble that recorded Gil’s first three Arista albums, check the raw sax playing of Bilal Sunni Ali.

‘It’s Your World’ is unusual in that Brian Jackson wrote both the lyrics and music. Also although recorded in the studio it has a very live feel to it, and blended in well as one of the studio cuts on an otherwise live double set of the same name. This is another track that sounds as fresh today as it did when first released 30 years ago. The live incredible live version of ‘Home Is Where The Hatred Is’ one of Gil’s most famous songs fully illustrates how great the Midnight Band were. This powerhouse version features some great musicianship and retains a powerful groove throughout its 12 minutes. The original version was included in the ‘Pieces Of A Man’ set from 1971, and has been recorded by many other artists most notably Esther Phillips.

The next four tracks are all taken from the 1977 set ‘Bridges’ one of his best, yet one that is often overlooked. On this album Brian Jackson plays Synthesiser bass, one of the earliest uses of an instrument that was to reshape the sound of soul music in the Eighties. ‘Racetrack In France’ and ‘Hello Sunday Hello Road’ are joyful uptempo tracks reflecting experiences from life on the road. ‘We Almost Lost Detroit’ tells of a near accident at a nuclear power station that had the potential to wipe the motor city off the map. In ‘Delta Man’ (Where I’m Coming From) you can hear the deep emotion in Gil’s voice as he reflects on his ancestry back to the Mississippi cotton fields.

‘Angel Dust’ is the second song on the collection warning of the dangers of drug abuse, taken from the 1978 album ‘Secrets’. From the same album, ‘Show Bizness’ is an hilarious look at the perils of the music business (‘they’ll take care of everything for only 95%’), whilst ‘Madison Avenue’ talks of the over commercialisation of western society (‘Buying is all that’s asked of you’).

Gil and Brian rounded off the decade with their 1980 album, the last they made together. Included here are ‘Shut Um Down’ (nuclear power again), and ‘Alien’ A tale of illegal immigrants from Mexico, who now make up a sizeable proportion of the population of Southern California, and other border states. After this album the fruitful partnership that had started on the ‘Pieces Of A Man’ album was dissolved, although they did get back together for touring together occasionally. Gil re-signed to Arista as a solo artist and made a further three albums until 1983. Brian worked with many artists as keyboard player/M.D most notably Phyllis Hyman, co wrote and produced Will Downing’s first album which went Gold, and worked with Kool And The Gang and Gwen Guthrie. He released his own solo album ‘Gotta Play’ in 2001, and is currently working with Ladybug Mecca and touring with Digable Planets.

It is ironic and very sad that Gil succumbed to the substance abuse that he had so forthrightly warned against, which apart from the 1994 album ‘Spirits’ and a few one-off tracks has limited his recording output in recent years. Hopefully he will overcome this and add further to the great musical legacy he has created, many of the most special moments of which are featured in this album.