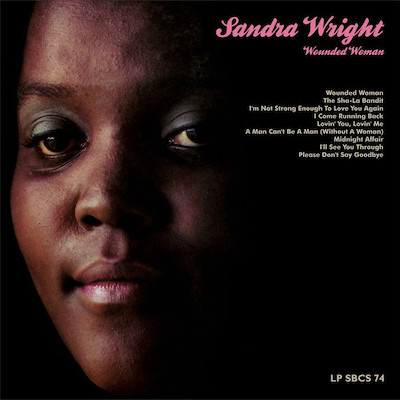 Sandra Wright was an incredibly powerful Soul singer who was born in Memphis and later based in Nashville. She had joined a white R&B band Canned Souls in 1967 and recorded a few 45’s before being spotted by Freddie North and signed by David Johnson.
Wounded Woman is one of the greatest Deep Southern Soul albums of all time. It was recorded at Broadway Studios Muscle Shoals in 1974 produced by David Johnson, in the same studio that Swamp Dogg used for his seminal albums by Doris Duke and Sandra Phillips. The album was licensed to Stax records Truth subsidiary label but only a couple of 45 were issued before Stax’s demise. It was eventually released by Demon records in the UK in 1989 to critical acclaim. That issue is now extremely sought after by Soul fans and collectors, copies change hands for up to £200.
The album contains nine classic Soul cuts, including the bouncy title track, deep soul ballads of great intensity like ‘I’m not strong enough to love you again’ and ‘I’ll see you through’ and three tracks that have been filling Modern Soul dance floors for years ‘Midnight Affair’, ‘I Come running back’ and ‘A man cant be a man’. Every track on this album is superb, hence its popularity and demand. This album should have been as big as Shirley Brown’s ‘Woman to Woman’ which was released on the Truth label in the same year, it’s that good, and Sandra would have been enjoyed the fame that Shirley attained.
The album has been re-mastered to a new higher standard pressed on 180gm vinyl and a new superior period style sleeve created to present the album how it might have looked had Stax released it in 1975.