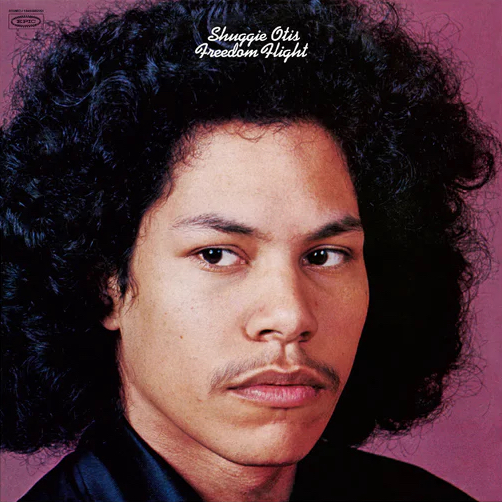 A1. Ice Cold Daydream
A2. Strawberry Letter 23
A3. Sweet Thang
A4. Me And My Woman
A5. Someone's Always Singing
B1.Purple
B2. Freedom Flight


Well before Shuggie Otis cut his debut album, musicianship and performance had long been a part of his life. The son of rhythm and blues legend Johnny Otis, Shuggie learned to play guitar as early as the age of two, and performed professionally with his father's band at eleven. Throughout his long and illustrious career he'd performed on records for the likes of Frank Zappa, Al Kooper, Etta James, and George Duke, to name a few. In spite of all this,widespread mainstream success eluded Shuggie for much of his career. His most famous release to date is his 1974 album Inspiration/Information, which would experience new resurgent life in the 2000s. Those willing to dig a little deeper however, would discover hidden gold in his earlier releases, especially in the album directly before Inspiration/Information, his sophomore 1971 release Freedom Flight. As with his debut, Freedom Flight was produced by Shuggie's father Johnny Otis, and built upon the distinct sounds of his debut album: lush, baroque, string section arrangements, paired with hard funk rhythms, and funky blues melodies, with the majority of the instruments once again performed by Shuggie himself. The album also features backing from premium session greats like George Duke and Aynsley Dunbar, and the track "Strawberry Letter 23" which became a monster hit for The Brothers Johnson 3 years later. Freedom Flight is a treasure of deft, technical skill, and virtuosic composition.