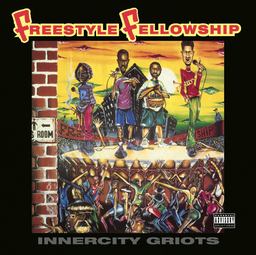 Innercity Griots, the second album from Freestyle Fellowship, is perhaps *the* essential West Coast left-field rap album of the early ’90s. Released in 1993 on 4th & Broadway, it’s a towering, progressive hip-hop masterpiece that expanded rap’s boundaries through lyrical elevation and production innovation. Their talent was ahead of everybody else by light years. This is pure b-boy jazz.

The original single vinyl LP is now hideously scarce, and of course the sound suffers from not being officially released as a double. This Be With re-issue fixes both problems, and for completeness also includes “Pure Thought” from the CD version of the album. This incredible display of imaginative hip-hop sounds better than ever.

Freestyle Fellowship were some of the earliest technically dazzling rappers to come out of California. Mikah 9, P.E.A.C.E., Aceyalone and Self Jupiter - along with DJ Kiilu - forged their famed lyrical dexterity in the ultra-competitive crucible of the Good Life Cafe. Founded in Leimert Park, South Central LA in December 1989, this earthy health-food store and cafe was where the city’s finest microphone fiends would gather to showcase their freestyle skills at the Thursday night open-mic.

Forcing MCs to raise the bar and stay fresh every week (a challenge made even tougher by the strict “no cussing” policy) the Good Life became an incubator for groups like the Pharcyde and Jurassic 5 and their events attracted big-names like Ice Cube, Snoop Dogg, Ice-T, Pharrell, and John Singleton. To Self Jupiter, the Good Life was “college - you had to come with something peculiar, left-field each week”. It served as a predecessor to the Project Blowed scene, and inspired influential club nights like Low End Theory.

The Fellowship’s “chopping” double-time raps were an evolutionary step for lyricism. A style that sounds freestyled: abstract hip hop before it existed. “We do double-time passages and runs and riffs” Mykah 9 told the LA Times in a 1993 article, “we improvise and play off of each other’s words and sounds-like jazz musicians do. What we are is liberators, liberating rap from its R&B/funk structures – that 4/4 [time] prison”. All 4 members were very different but they all had a unique jazz-scat style that was fresh. Their flamboyant chopping technique seemed like they were trying to rap at the speed of thought and it influenced everyone from Snoop to Ras Kass to Xzibit to Kendrick Lamar.

Innercity Griots has been described as the Rosetta Stone for rap styles. The group’s dense, vibrant wordplay and enviable interplay quickly earned the attention and respect of the city’s hip-hop underground. Frenetically trading acrobatic rhymes with agility and grace, the Fellowship used their voices as instruments like true virtuosos, spraying improvised raps like a Coltrane sax solo.

With the bulk of the album’s production handled by The Earthquake Brothers, and Bambawar, Daddy-O, and Edman taking over for some of the tracks, Innercity Griots dances between organic and programmed music, largely forgoing sampling and instead built around live jazz jams. The likes of Freddie Hubbard’s “Red Clay” and Miles Davis’s “Black Comedy” were used more as templates for house band The Underground Railroad Band to spiral out from. As Pitchfork noted in their recent 9.0 review of this classic album, “Freestyle Fellowship embodied the style and spirit of jazz on a molecular level. They shared the effortless cool and tough countenance of the great bebop players from the ’50s without verging into jazz-rap parody. Their innate jazziness felt tangible and hard-earned”.

Indeed, just days after its release, they chose to celebrate Innercity Griots at Hollywood’s Ivar Theatre not by sharing the stage with contemporary rappers, but instead by performing live with jazz legends Horace Tapscott and Don Cherry, as well as proto-rap spoken-word ensemble The Watts Prophets.

The unusual approach to the music was matched by the Fellowship’s lyrics. Eschewing the tired rap tropes of the time, this multifaceted album instead explores their ruminations on greed and homelessness, weed, sex, survival, insecurity and tribalism.

The album’s abrasive opening salvo of “Blood” and “Bullies of the Block” will knock you sideways. P.E.A.C.E. spits a quick a cappella piece before “Bullies of the Block” swaggers in with a stabbing, rolling could-be-Bootsy bassline to die for with wild horn snatches and knocking drums. The effortless, enviable flows quickly establish that you’re hearing something utterly unique and completely captivating. Aceyalone boldly claiming that he’s “making the kind of music that will outlast you” - that’s nearly 30 years ago now and he’s not been proved wrong yet.

“Everything’s Everything” brings a breezy lightness to the archetypal hype posse cut, and shows off the Fellowship’s thrilling chemistry. With assurances that everything’s “all right y’all”, there’s a sense that tempers are cooled, microphones prevail and a certain Kendrick Lamar may have taken notes.

The bouncy “Shammy’s” is a loping dedication to the pursuit of the opposite sex, produced by Stetsasonic’s Daddy-O, whilst the quick-fire “Heat Mizer” has the spirit and feel of a totally improvised cipher. The moody P.E.A.C.E. solo track “Six Tray” is an off-kilter slo-mo rider anthem, bringing that smooth, syrupy-sticky LA sound whilst looping up strangled horns. The brilliantly chaotic, siren-heavy “Danger” comes on like a West Coast Bomb Squad production, the group detonating lyrical and stylistic bombs at will. All four members rip through their verses and rhymes at break-neck pace, ricocheting through the tracks with seemingly limitless energy. It’ll leave you spinning.

An undeniable highlight (on an album packed with them) the peerless “Inner City Boundaries” invites Daddy-O to stop on by again, this time to drop off a smooth instrumental and lace a verse. Featuring an irresistibly catchy, sing-a-long hook, it sounds like it was recorded in a smokey jazz lounge late one Saturday night. The Fellowship rap - and occasionally scat - over a live backdrop, searching for the freedom to express themselves in a world that’s hostile to their very existence: “I gotta be righteous, I gotta be me/I gotta be conscious, I gotta be free”.

“Cornbread” is Aceyalone’s remarkably faithful 808-drenched tribute to old school hip-hop and ’80s electro. Synth drums, handclap snares, elastic bassline - it’s all there. “Way Cool” is probably the funkiest hip-hop track about cannibalism ever recorded and on hot club track “Hot Potato”, the crew again trade lines and harmonise old school routines over funky organ. The blissed-out “Mary” is a mellow ode to weed, riding a duo of samples from O’Donel Levy’s version of “Never Can Say Goodbye” and Henry Mancini’s “Lujon”. Everyone sounds as horizontal as you’d expect.

Mykah 9’s beautiful and moving “Park Bench People” is one of Innercity Griots’ most beloved and unique tracks, something that wouldn’t feel out of place on a traditional vocal soul-jazz record. Arguably as skilled a singer as he is a rapper, Mykah 9 weaves a downbeat tale of the homeless in Leimert Park and across LA, channeled into stream-of-consciousness scats and whispers, bellows and moans. Just sensational.

The strung-out “Heavyweights” reveals the Fellowship at their most adversarial. They bring plenty of back-up to this rowdy posse cut, perfectly distilling the uproarious intensity of a cutthroat MC battle.

The album closes with the patchwork rap kaleidoscope of “Respect Due” and of course, for the sake of completeness, there’s also “Pure Thought” from the CD release, a stunning track full of elegant fireworks and a brilliant sample of Billy Cobham’s “Stratus”. Amazing.

The Fellowship weren’t all that concerned with following industry trends and 4th & Broadway struggled to market the group and get air play. Overshadowed by the hype around fellow ’93 rap classics (Wu-Tang, Snoop, Tribe) the group never got the wider recognition that they deserved at the time.

In West African tradition a griot is a repository of vital history, sharing stories and wisdom with each generation by setting words to music. Over the past three decades, Innercity Griots has been ushered from rapper to rapper and from fan to fan as a rite of passage. As both oral history and foundational rap music, it will, indeed, outlast us all. Aceyalone was right.

Remastered by Simon Francis for double vinyl and cut by Pete Norman, we hope this long-overdue re-issue satisfies the legions of fans that have since been bewitched by the majesty of this record. It should also introduce some new listeners to yet another overlooked classic.