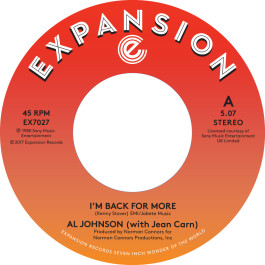 Al Johnson, I'm Back For More / I've Got My Second Wind

Al Johnson came from the 60s Washington group The Unifics, then in 1978 he released a debut album Peaceful' on an independent label. It featured the original version of I've Got My Second Wind' that would later be re-recorded and become a popular song from his 1980 CBS album Back For More' and is featured here. The song I'm Back For More' was a duet from the album featuring Jean Carn which is released in its full length version here on Expansion for the first time. Both songs timeless moern soul classics.