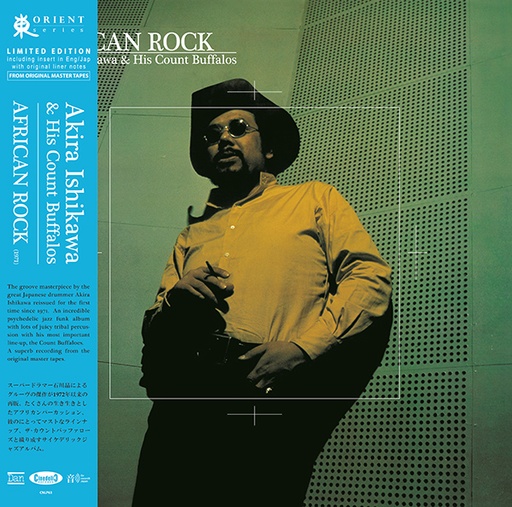 Reissue, originally released in 1971. Japanese jazz drummer Akira Ishikawa has recorded countless albums with the band Count Buffalos, though few are quite as revered and sought-after as 1971 set African Rock. Of his albums, this is certainly the most dazzling and impactful, flawlessly produced. More than "African rock", it is psychedelic spiritual jazz with funky veins; the set is a brilliant blend of Akira Ishikawa's favorite styles with juicy, tribal, and deep percussive elements -- his drums are flanked by Kenji Shiraishi's marimba and Masami Kawahara's percussion -- which in some moments recall Fela Kuti (see the superb "Animals / Mnama") and in many other the electric Miles Davis. He brings a completely new global sound to his music with the inclusion of the electronic component with the "tabbing" of Kimio Mizutani's guitar solos and electric piano accompaniment by the great Hiromasa "Colgen" Suzuki (also on acoustic piano and composition). Undoubtedly one of the best records produced in Japan in the '70s. Unmissable! Fully licensed and remastered from the original tapes. Includes OBI and insert.