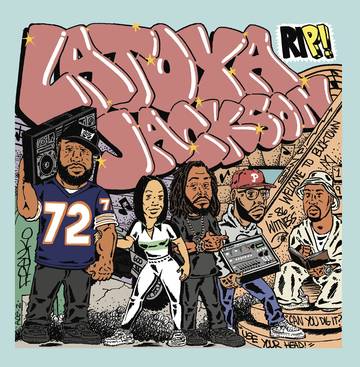 B1 Latoya Jackson (Back To The Old School Remix)

Just in time for Record Store Day 2020, Coalmine Records and Duck Down Music are happy to announce the 7’ release of "Latoya Jackson," the commanding, gritty posse cut first appearing on Sean Price & Small Professor's LP, 86 Witness. The A-side is the original version which features Quelle Chris with cuts from DJ Revolution, while the flip side features the “Back to the Old School Remix,” with a gracious guest verse from the luminary lyricist Masta Ace.

Adding to the record's allure for bonafide collectors and hip-hop fans alike, the artwork has been handled by Atlanta-based heavyweight FRKO (Action Bronson, Gucci Mane), who expertly reimagined the cover of Just-Ice's classic Back to the Old School (Fresh Records, 1986). With an aptitude for details, FRKO's vibrant visual take superimposes Masta Ace into the scene, drawing from the rap veteran's cover artwork for his 2004 album, A Long Hot Summer. The parallel merger of classic iconography and refined cultural references accents the 7" release with exemplary execution, giving new legs to a track that further personifies the coveted energy of its initial release as an exclusive Record Store Day drop, all while paying homage to the late legend Sean Price.