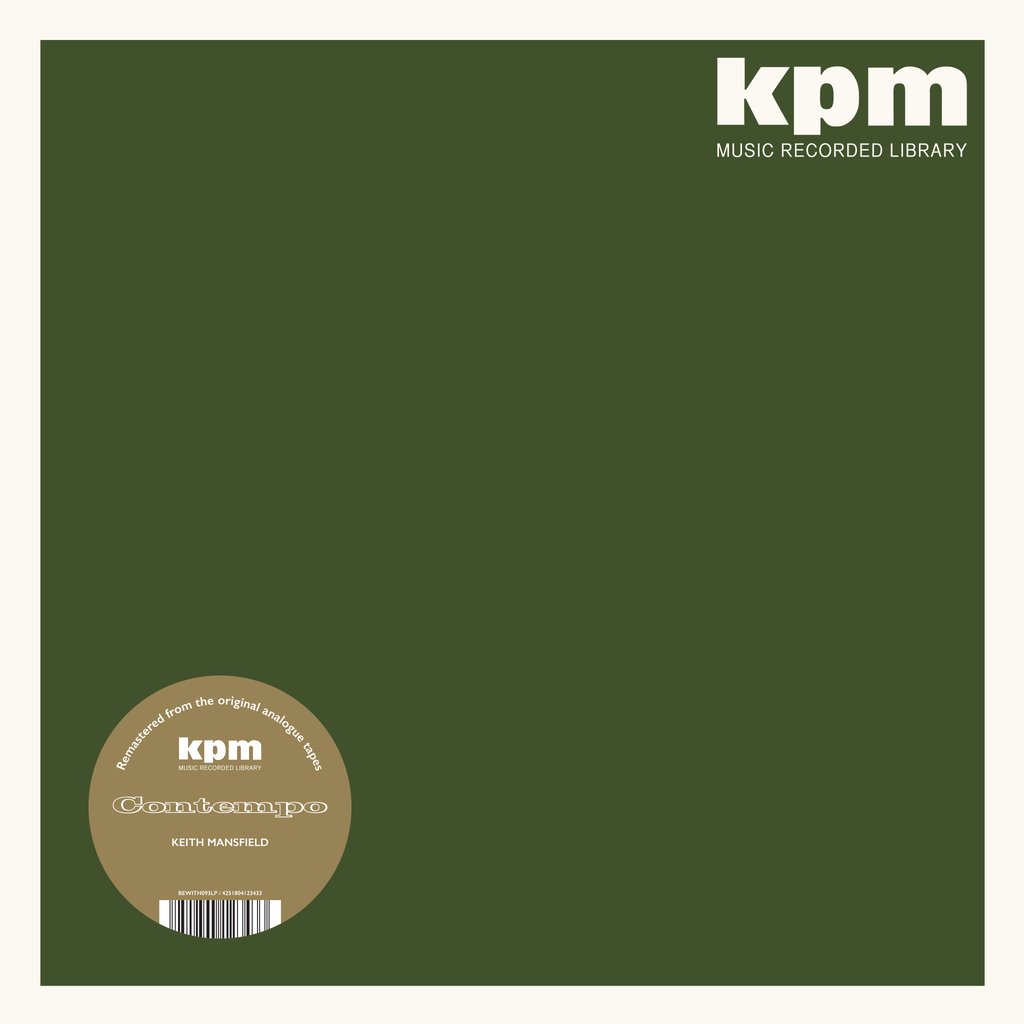 We say: Contempo is one of the best full album listens in the KPM 1000 library. Succinct smoking soul, super tight breaks and string-drenched sleaze composed by the library master, Keith Mansfield.

The creator of the romping tunes that became the iconic themes to the BBC’s Grandstand programme and their televised Wimbledon Tennis Championship coverage, Keith Mansfield was perhaps KPM’s most prolific artist from the mid 1960s right the way through the 1980s. As well as the sort of pop orchestral sound that is all over these classic library records, he could also turn his hand to raw, edgy rock and funk. Quentin Tarantino is a big fan, going as far as including some of Keith’s work on the soundtracks to Kill Bill and Grindhouse.

Many library records are a game of two halves and Contempo is certainly one of those. The first side cooks on a high funk breaks flame whilst the flip is something altogether more tranquil, yet no less groovy. It lays back with dreamier, post-coital grooves.

Rugged funk opener “The Fix” confidently displays its low slung languid grooves with heavy drums, horns and bass. Smokin’ in slow motion. The punchy “What’s Cooking” follows and has a lighter, more whimsical touch. But the drums still roll and the clavs wiggle in fascinating opposition to those horns. The dark and moody intro to “Cut To Music” gives way to a more inclusive, relaxed funk that’s all irresistible bass and stabbing horns. The mid-tempo “Man Alive” signals the time to really get down. A percussive monster jam. If you can’t strut to this then we really can’t help you! Closing out the A side, fresh guitar licks drip all over the slick drums of “Funky Footage”, with a New Orleans piano vibe coming on to really light a fire.

Whilst the dramatic crime funk of the A side is enough on its own to have earned this record its place in the great library record canon, it’s undoubtedly the more smoothed out B side for which Contempo is rightfully adored and celebrated. It’s so chilled and mellow, with beautifully arranged, sweeping strings, sax solos aplenty and a real 70s soundtrack feel. Think Love Boat, CTI label, Bob James, Grover Washington Jr.-type jams.

The super sleek and sexy jazz funk of “Breezin’” is as light and magical as you’d hope. An open-air masterpiece, its indulgent sound is just a taster of the sophisticated funk to follow. The elegant, romantic feels of “Good Vibrations” (used brilliantly by Odd Future’s Mike G for “Swiss Army”) is a string-drenched, wah-wah fuelled ode to living your best life. Nonchalantly. Whilst it keeps a very West Coast feel, the blaxploitation strut is certainly more Blackbyrds than Brian Wilson. “Sun Goddess” will blow your mind with the sensuous sound of glorious horns and beautiful keys. The luxurious “Love De Luxe” and its horizontal grooves have been much sampled, but here it proves that it doesn’t need any help to get you in an intimate mood. Closer “Snake Hips” is a cool mid-pace slouch. Just divine.

Originally released in 1976 but, like the very best KPM records, wonderfully timeless, Contempo is also no mere LP-length collection of loosely related tracks. This is a rare example of a library record that is a genuinely great listen from start to finish.

As with all of our KPM re-issues, the audio for Contempo comes from the original analogue tapes and has been remastered for vinyl by Be With regular Simon Francis. And as usual, the sleeve reproduction duties were handed over to Richard Robinson, the current custodian of KPM’s brand identity.