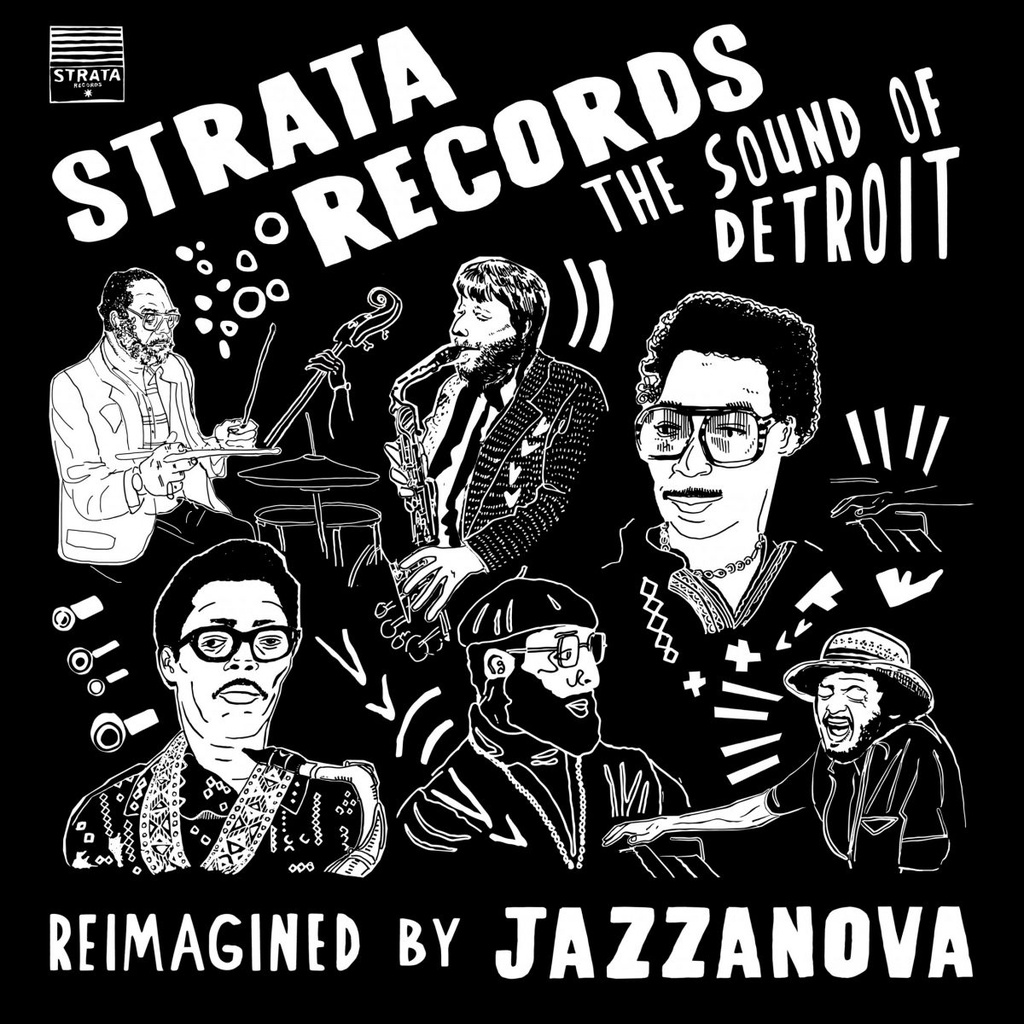 Strata Records – The Sound of Detroit – Reimagined By Jazzanova

In association with DJ Amir and 180 Proof Records, BBE Music proudly presents ‘Strata Records – The Sound of Detroit – Reimagined by Jazzanova’, a brand new celebration of the iconic imprint.

How does the Berlin-based production collective Jazzanova find itself reimagining songs from the iconic, Detroit record label Strata? “I couldn’t think of a more perfect band to do this work,” DJ Amir says about Jazzanova, a combination of DJs, record collectors and musicians, “because they brought passion and love to the project, because they know the music and love the music. And on top of that, they know how to play.” This unlikely, yet ideal pairing is the result of years of work and passion from Amir Abdullah, the crate-digging, DJ and label- head for 180-Proof Records which in 2011 began reissuing the groundbreaking Strata Records back catalog and unreleased gems from the vaults. On Strata Records – The Sound of Detroit – Reimagined by Jazzanova, DJ Amir and Jazzanova breathe new life into eleven hand-picked tracks from the Strata catalog for fans of the label’s historic recordings and new ears alike.

Strata Records rose from the ashes of Detroit’s tumultuous 1960s decline. Motor City famously burned in 1967 and then again in 1968, leading to mass exodus of those who could afford to relocate out of the city. “The people of Detroit don’t call it the riot,” Barbara Cox, the widow of label-founder Kenny Cox says, “they call it the insurrection.” From the ashes of the insurrection, Kenny Cox founded Strata as a community organization that initially ran food drives and jazz programs.

Not unlike the original Strata collective, Jazzanova is a creative musical community in a constant state of evolution. Founded in 1995 in Berlin, the original five members came together as a collaboration between DJs and producers to create future-focused dance music inspired by their shared love for “funk, jazz, disco, Latin… all kinds of things – but mostly old records,” founding member Stefan Leisering explains. Never content to stand still, in 2009 Jazzanova also started to play live with their own band, reinterpreting classic sounds and creating new songs, all leading to this latest collaboration with DJ Amir. It only makes sense in today’s bizarre music landscape that the better-known Berlin-based Jazzanova is celebrating the legacy of an obscure jazz label from Detroit. For Leisering, there’s no contradiction, “because we aren’t just musicians and remixers, we are also record collectors, and I love rare records, and I love listening to stuff that isn’t even available, because it’s obscure and lost.”

Their versatility and breadth of knowledge is also what makes Jazzanova the perfect partner to reintroduce Strata to a contemporary audience who may not have ever heard the original records. “I would say there’s definitely a ‘Strata sound,’” Leisering says, pointing to the use of a Mellotron (which was gifted to the label by John Lennon & Yoko Ono) that graces many of the label’s releases, adding ambient string and flute arrangements. “But at the same time,” Leisering continues, “musically it has a small output, but it also has a wide range . . . some records have an avant-garde, modern-jazz twist, others have Latin jazz, or even a soul vibe.” To remix a single song by a single artist is one thing, but to capture the diversity of styles and vibes across a family of creative musicians is another, requiring versatility, sensitivity and superb chops. “In the past we were working more like producers,” Leisering says, but with help from unofficial bandleader Stefan Ulrich, they’re now “recording layer by layer with the live band. It’s a new experience and we can also let our experience of making remixes enter that process.”

This is no covers album, as Jazzanova’s take on Lyman Woodard Organization’s musical manifesto ‘Creative Musicians’ makes clear from its Afrobeat inspired horn arrangements, drum track and syncopated tempo. The vocalist for these sessions is Sean Haefeli, who originally hails from Indianapolis, and brings a relaxed urgency to his contributions, sounding like a young Gil Scott-Heron.

On the Malauwi tune, ‘Root in 7/4 Plus’, Jazzanova stretches out for ten minutes, transforming the original into a deep, dense meditation. The rhythm section extends the original’s outro vamp with pulsing horns and Haefeli’s urgent vocals, making the listener feel the mantra: “the blues are all around me.”

“I really tried to combine my knowledge of club music and electronic music with a soundtracky and funky vibe,” Leisering says about their reimaginations. For ‘Saturday Night Special’, Jazzanova’s take on The Lyman Woodard Organization’s lo-fi jazz funk classic sounds more like it’s soundtracking the excited strut into the club on a Saturday night, than the original’s moody, afterhours vibe. “When I was working on it I approached it like I was doing a remix,” Leisering explains. “I started at my computer, thinking about a rhythmic structure, bassline and everything, then I gave this to the band, to develop organically”.

Opening with a circular guitar pattern and electric keyboards before a polyrhythmic groove lays the rhythmic foundation, Sphere’s ‘Inside Ourselves’ is transformed into a searching jazz gem. On this beautiful interpretation, Jazzanova finds a sweet spot melding elements of African highlife, Latin jazz and spiritual jazz for this reimagination of the original.

The album’s closing track ‘Loser’ is a “seventies street blues with a soul-jazz vibe to it,” Leisering explains, “and we thought we could give it a nice modern twist.” Sam Sanders’ original is a melancholy jazz dirge, an unlikely inclusion for this album, but, “Stefan [Ulrich] and I were considering the song because we thought it offered a lot of space to make the song happen in the studio” Leisering insists. The reverb-drenched opening guitar chords combined with Haefeli’s off-center vocals create a woozy vibe, somewhere between gloomy and dreamy.

Re-emerging, reimagined in Berlin fifty years later, DJ Amir and Jazzanova translate the diverse sounds and styles of the Strata Records legacy into a soulful and cohesive musical statement that honors the label’s community of creative musicians.