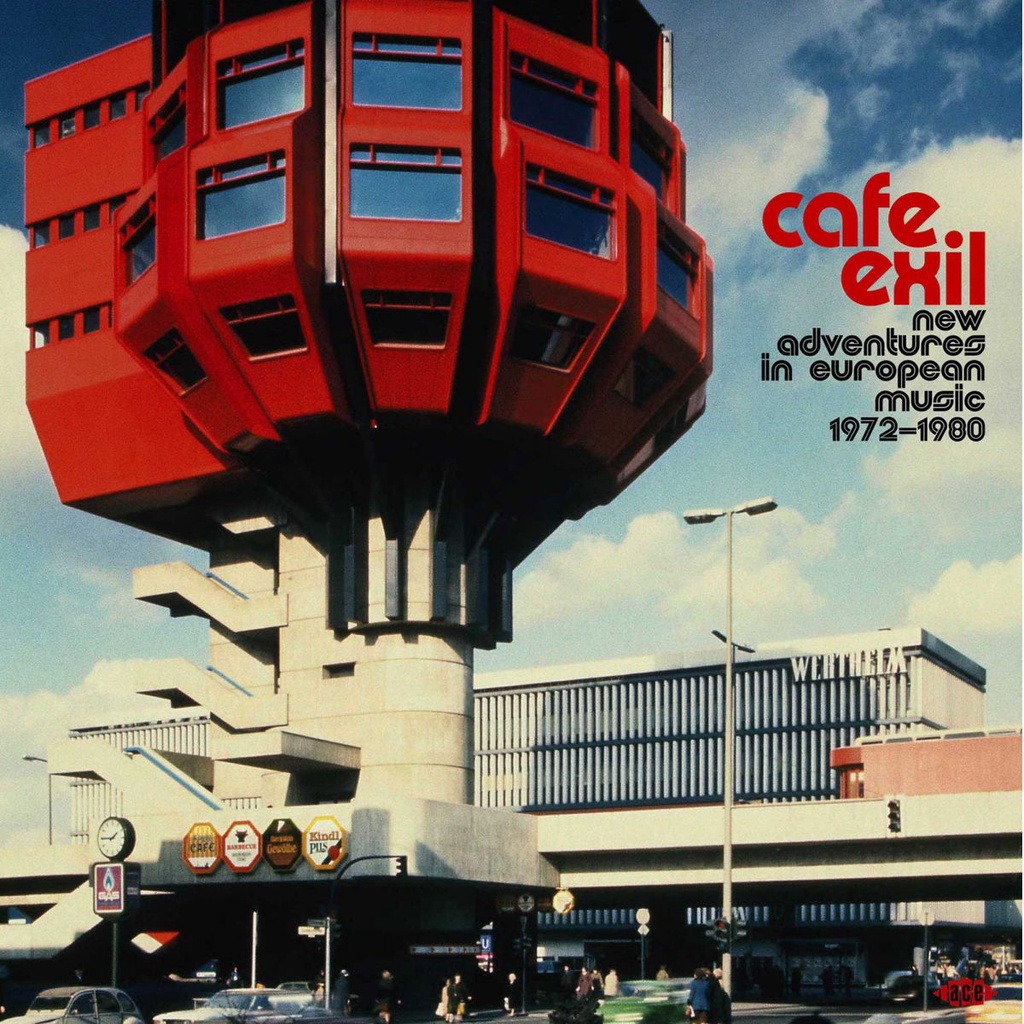 When David Bowie and Iggy Pop escaped LA to go Interrailing in the mid-70s, they heard a new European music that was largely devoid of Anglo-American rock influence: the German motorik sound, flashes of jazz, experimentation and electronica. In West Berlin, one of their favourite haunts was Kreuzberg’s Cafe Exil, a smoky hang-out for beats and intellectuals. This is its imaginary soundtrack.

I imagine like many an Ace compilation, the impetus for “Cafe Exil” came from a record-playing session. One Sunday afternoon Bob and I were pleasantly pulling out LPs. Everything we played had a mildly electronic and European feel, perhaps as an antidote to the dreaded and then still looming Brexit. The majority of records we spun were fairly extensive in length, largely instrumental and hailed from the mid to late 1970s, with a few just edging into the following decade. Over subsequent conversations, we began to imagine ourselves going back in time and enjoying a pan-European sojourn, soaking up the sounds and cultures of the rapidly shifting time.

David Bowie, of course, had done something similar, becoming a kind of cultural antenna as he sought to expand his horizons and open himself up to new influences. Though he had flown for the majority of his 1973 Ziggy Stardust tour schedule, after completing concerts in Japan, Bowie convinced his record label that he would require safe passage back to England by sea and land. Initially travelling from Yokohama to Nakhodka aboard the SS Felix Dzerzhinsky, Bowie travelled onwards with childhood friend and back-up singer Geoff MacCormack via the Trans-Siberian railway from Vladivostok to Moscow. The trip concluded with a stopover in Moscow, the witnessing of the May Day parade and a visit to the Kremlin and the GUM department store. A second Russian train trip occurred in April 1976 during the tour to promote Bowie’s “Station To Station”, this time in the company of his formidable assistant Coco Schwab, photographer Andrew Kent and Iggy Pop. Bowie and Iggy relocated to Berlin following the recording of Iggy’s “The Idiot”, abandoning bad finances, the trappings of Bowie’s stratospheric stardom, failing marriage and perilous cocaine addiction for an apartment in the relatively working-class Schöneberg district in West Berlin, which was then home to many of the city’s gay clubs. Living in Berlin from 1976-1979, Bowie was attracted both by the emerging Kosmische music and the cheap living and anonymity it afforded him.

So what then are some more of the actual parameters for the songs you are about to listen to? In attempting to conjure the musical mood in the period referred to above we wanted to try and imagine some of the sounds and musical textures that fed into them and then expanded out of them. To do this we set ourselves a timeframe of 1972-1980. We were originally going to choose only instrumental tracks with a strong electronic element but then took various deviations and detours as we tried to imagine ourselves speeding through strange European cities and landscapes, meeting in cafes and soaking up new sounds and visions. We wanted to try and capture a mood and tone rather than something entirely concrete (or concrète), so have drawn upon motorik, library music, progressive rock, Italian folk fusion and more. There is a balance that leans quite naturally towards German artists and the inclusion of a track by Eno that acknowledges both his role as a sonic alchemist and his ability to act as a conduit and conductor for all music that is dictated by mood but not constrained by boundaries. The whole exercise came together quite seamlessly, really, the only thing that Bob and I still haven’t agreed on is which of us is David and which of us is Iggy.