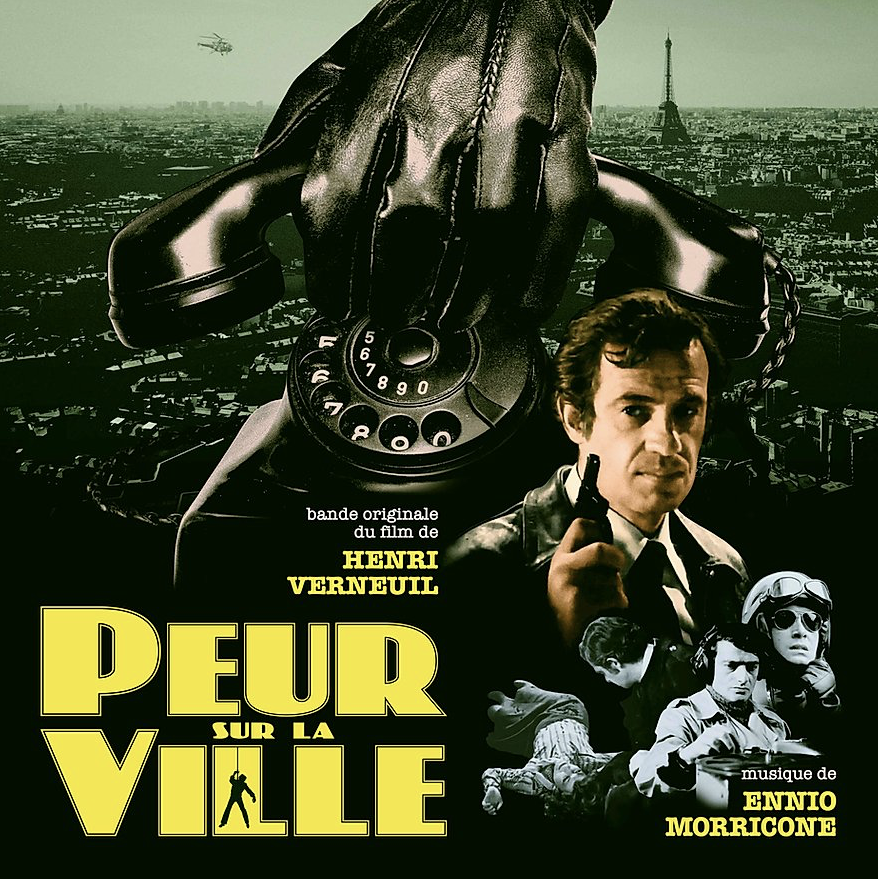 ENNIO MORRICONE'S SUPERB 1975 SOUNDTRACK FOR FRENCH FILM "PEUR SUR LA VILLE," REISSUED FOR THE FIRST TIME ON DOUBLE VINYL INCLUDING A 2ND LP WORTH OF BONUSES WITH TWO COMPLETELY UNISSUED TRACKS. THIS EDITION APPROVED BY ENNIO MORRICONE IS REMASTERED FROM THE ORIGINAL TAPES AND FEATURES LINER NOTES BY FELLOW MUSICIANS AND MORRICONE ADMIRERS AM AND JB DUNCKEL (AIR). GATEFOLD SLEEVE DESIGNED BY ERIC ADRIAN LEE.

Wewantsounds is delighted to announce the very special reissue of one of Ennio Morricone's most striking soundtracks composed for Henri Verneuils' 1975 film Peur Sur La Ville (Fear Over The City). This special edition includes the original score released in 1975 plus a second vinyl worth of bonuses which have never been out on vinyl. These includes two tracks making their official debut after 45 years!

Ennio Morricone's association with French director Henri Verneuil comes close to the one the Maestro had with Sergio Leone. This fruitful collaboration spawned many classics including The Sicilian Clan (1969), Le Casse (1971), Le Serpent (1973) and I Comme Icare (1979). Peur Sur La Ville from 1975 is probably the peak of their collaboration and is undoubtedly one of Morricone's best scores.

​The thriller featuring Jean Paul Belmondo was a huge blockbuster hit in France and Morricone's soundtrack became equally famous. It features all of Morricone's trademarks: a catchy theme with haunting piano chords, Alessandro Alessandroni's whistle, dissonant strings, melodramatic melodies and catchy sexy groovy tracks. But as the French film failed to become an international hit, its score didn't get the exposure it deserved becoming cult only to the circle of Morricone fan. John Zorn did feature the "Peur Sur La Ville Theme" on his cult 1984 hommage to the Maestro, "The Big Gundown" (making it to second position in the tracklist) but the soundtrack never had the trajectory of the soundtracks made for Sergio Leone.

​A wealth of bonuses tracks were unearthed in the 90s but this is the first time they make it to vinyl. The Wewantsounds team have completely re-sequenced the whole tracklist in a more chronological way and added two fascinating completely unissued tracks including a superb alternative version of the theme "Minaccia Telefonata."

​For this special edition, we've asked Californian musician and soundtrack expert AM to team up with his good Paris friend, Air's JB Dunckel to discuss the "Peur Sur La Ville" film and music and their common admiration for the Maestro's music. This edition come in a lavish gatefold sleeve superbly designed by American illustrator Eric Adrian Lee making good use of the film photos. A special edition that will honour one of Ennio Morricone's most striking soundtracks.