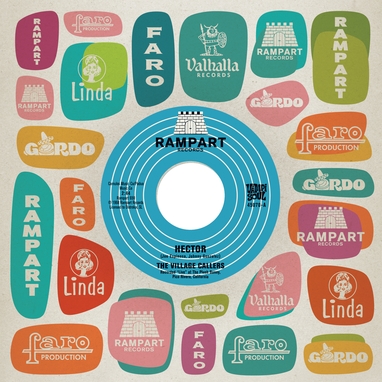 The Village Callers were born out of a band called Marcy & The Imperials in the mid-1960s and soon became very popular in East Los Angeles, playing all the top venues. They brought many different sounds into the mix: jazz, soul, R&B and Latin percussion… Their manager, Hector Rivera, got them a record deal with Eddie Davis’ Rampart Records in 1968 that led to three 45s and their only ever LP, “Live”.Their first 45 featured two original compositions: ‘Hector’ (also included in the LP) on the A-side, an original composition which became a hit in Los Angeles, backed by the wonderful ballad ‘I’m Leaving’. It’s easy to see why ‘Hector’ quickly gained airplay and took off, thanks to its hip and infectious Latin groove which would later be sampled by hip hop artists such as De La Soul, Beastie Boys, Cypress Hill, Ice Cube…Similarly, it’s not surprising that ‘Hector’ has been picked by Quentin Tarantino to be part of the soundtrack of his new film, “Once Upon A Time In Hollywood”, set in late 60s Los Angeles, as the song’s effortless vibe really takes you to that time and place.Unfortunately, the recording career of The Village Callers didn’t last too long after they decided to change label management and left Eddie Davis. Also, their powerful Latin sound progressively faded out as the original members were replaced by new musicians, transforming The Village Callers into a rock band.