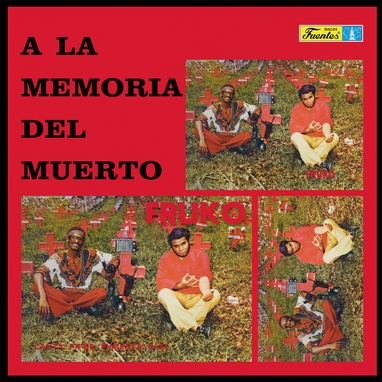 A1 A La Memoria Del Muerto

B1 A Bailar Oriza

B5 Rumbo A La Ciudad

"A la memoria del muerto" is Fruko y sus Tesos' second album, released in 1972, and features exclusively the soaring and soulful vocals of Cali native Edulfamid Molina Díaz, aka "Píper Pimienta", Fruko's previous vocalist Humberto "Huango" González having left after the first album "Tesura". The record is a mix of spirited cover versions and authentically Nuyorican-sounding originals with a Colombian twist, while the cover art, enhanced by an abundance of blood-red design, is quite something, featuring Píper Pimienta and Fruko dressed as gun-toting hippies doing drugs in a cemetery while a transistor radio plays. Just as eye-opening as the music is celebratory! According to Fruko, the Woodstock generation was finally making itself felt in Colombia, and they were embodying the name of the album literally, ostensibly pointing out the dangers of said drug-thug lifestyle in no uncertain terms (the police threw them out during the shoot thinking they were authentic gangsters).Produced and engineered by Fruko's uncle Mario "Pachanga" Rincón, the album has an uncompromisingly stark, hard sound that is appealing to today's collectors of 'salsa brava' just as it was impactful on the Colombian scene when it was made at the beginning of the 1970s (very little of this type of music was produced in Colombia at the time). Unlike the first Tesos album, with a two trumpet line-up and fairly simple arrangements, this more mature recording added another trumpet and two trombones for a more robust brass attack. Additionally, instead of basic salsa, there are many different rhythms – guaguancó, bomba, plena, oriza, bolero, cha-cha-chá, descarga and Latin soul. Though Fruko's sound at this stage wore its New York, Havana and San Juan sources on its sleeve – Willie Colón, Javier Vázquez, Richie Ray to mention a few progenitors –, at the same time the album has a uniquely Colombian approach to these influences with the bounciness of coastal music like cumbia being felt throughout.The title song is a 'guaguan-plena' version of Dominica y su Conjunto's original 'acuyuye' (ie pachanga) hit of the same name from a decade earlier. Following that is Fruko's take on Cuban pianist Javier Vazquez's driving salsa dura anthem 'Mi verdadero son'. For a little variety, next up is a rendition of Puerto Rican pianist Raphy Leavitt's famous lovelorn bolero-cha 'Payaso' from 1971. Píper Pimienta brings the energy up again with Fruko's own bomba 'Los niches' – a party tune with an Afro-Colombian theme. The side finishes out with more cover versions: the double-entendre 'La fruta bomba' by Cuban trovador Maximiliano "Bimbi" Sánchez y su Trío Oriental and the fiery rumba gitana 'Achilipu' – first recorded by Barcelona's Gypsy Queen, Dolores Vargas, and subsequently made into a salsa groover by Puerto Rico's El Gran Combo in 1971. Side B kicks off with one of Fruko's favorite Afro-Cuban artists, the conguero and Santería singer Silvestre Méndez, with 'A bailar oriza' (made famous by Cortijo y su Combo in the 1950s). After a wild descarga (jam session) track, we are treated to a fun pair of cover tunes: Johnny Zamot's 'Bomba africana' (more triangle!) and the old Afro-centric chestnut by folkloric Cuban rumbero Alberto Zayas, 'Baho Kende' – a hit for Celia Cruz and La Sonora Matancera in the 1950s but done here in the early Willie Colón style. The record finishes off with another Fruko original written with his Discos Fuentes colleague Isaac Villanueva. The lyrics are from the point of view of the poor country peasant leaving the mountains and escaping the slavery of rural poverty for what he thinks will be the promise of opportunity dubiously offered by "The Big City".This reissue features as a bonus the Latin soul track 'Tihuanaco' (a cover of Peruvian pianist Alfredito Linares), which appeared on the US edition of the LP.Pablo Yglesias aka DJ Bongohead