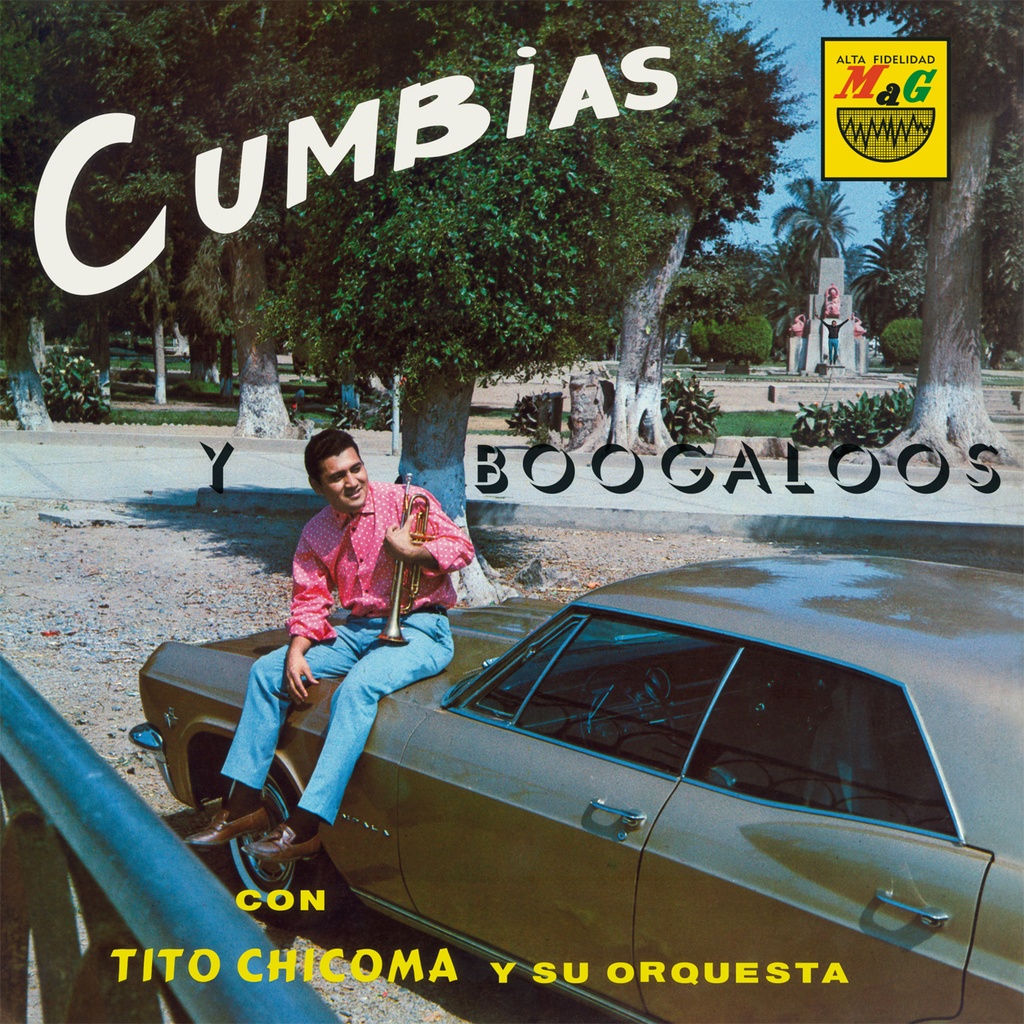 Peruvian trumpet player Tito Chicoma dedicated his 1968 LP on MAG to recording two fashionable rhythms at the time: "Cumbias Y Boogaloos”.
Although Colombian cumbia had gained popularity much earlier, Boogaloo in Peru was championed primarily by the MAG record label, which kept its listeners abreast of tropical music developments in New York, releasing and distributing records by Alegre Records and recording versions of hit songs.
An extremely rare and obscure tropical gem loaded with dance floor tunes, reissued now for the first time.


The musician Roberto Enrique “Tito” Chicoma forged one of the most solid and constant career paths in Peruvian music. Self-taught, he started playing tenor saxophone in his father's orchestra, also playing the trumpet, piano or trombone when the occasion arose.

In 1959, at the age of 23, Tito moved to Lima, where he soon joined ensembles such as the Koki Palacios and Armando Boza orchestras, which took him abroad for the first time on tour. A recognized musician in his own right, Tito would later decide to form his own orchestra, which was soon hired by América Televisión, starring on programs such as “El Show de Juan Silva”, where he accompanied international artists that visited Lima.

In 1966, Tito made his first record under his own name on the MAG label, performing two cumbias by the Colombian group Los Teen Agers. The praise the single received led to the recording of his first LP, "El ritmo de moda", where he continued to compile Colombian songs.

At the end of 1967, he dedicated his new LP project to recording two fashionable rhythms at the time: cumbias y boogaloos. The Colombian cumbia became popular in Peru from 1964 onwards, when local orchestras like those of Andrés de Colbert, Mario Cavagnaro, Eulogio Molina and Lucho Macedo recorded cumbia hits, then the genre soared when groups like Los Pacharacos and Los Demonios del Mantaro mixed it with Andean music. Boogaloo in Peru was popularized chiefly by the record label MAG, which kept its listeners up to date with developments in tropical music in New York, releasing and distributing records by Alegre Records and recording versions of hit songs such as 'El pito' and 'Mamblues' with local musicians.

The recording sessions for "Cumbias y boogaloos" began in December 1967, when Tito released one of his first compositions: 'Dale U'. He also recorded the instrumental track 'La cigüeña' and 'Plaza de toros', two compositions by the Venezuelan artist Hugo Blanco.

At the beginning of 1968, Tito and his band traveled to Buenos Aires, hired by Argentinean boites to liven up carnival nights with his cumbias. On his return in February, he recorded two more songs, both from the Alegre Records single: 'Mr. Trumpet Man' and 'El Diri-bop' by Puerto Rican musicians Richie Ray and Bobby Cruz.

Then, during May, Tito recorded a couple of songs by the Venezuelan guitarist Orlando Peñaranda Moros and his group Orlando y su Combo: 'Pata Pata pelada' and 'A que tú no sabes'. The former was inspired by Miriam Makeba's 1967 global hit 'Pata pata'. The sessions were complemented by recording 'La cebolla', a composition by the Colombian songwriter Graciela Arango de Tobón, and also the Amazonian waltz 'La contamanina' that was recorded with a cumbia beat.

By September 1968, the LP was released and received extensive airplay on the radio, especially the cumbias. This is an extremely rare and obscure tropical gem loaded with dance floor tunes, reissued now for the first time.