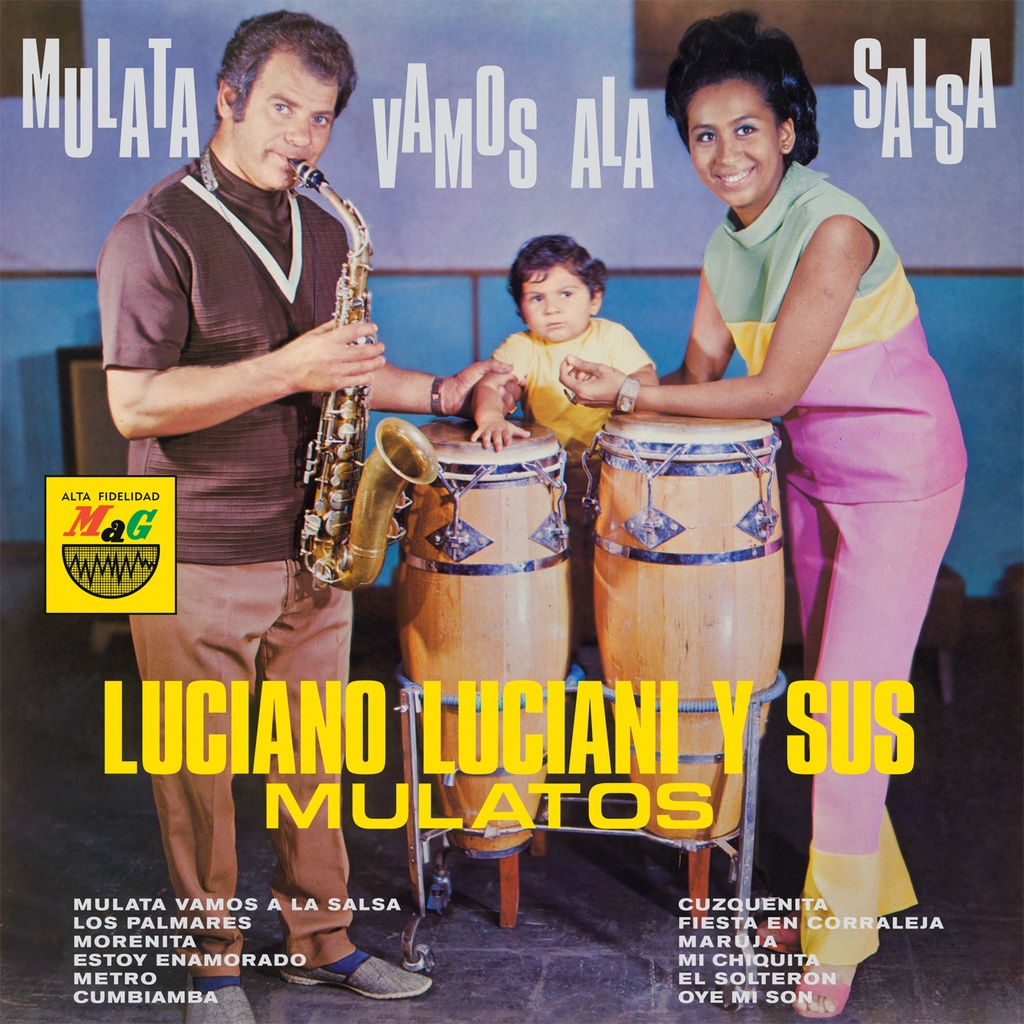 Italian migrant relocated to Peru Luciano Luciani put together an orchestra in 1968 which performed under the name Luciano y sus Mulatos after gaining a name as composer in that country.

His debut album “Mulata, Vamos a la Salsa” was originally released on MAG in 1970, comprising mainly cumbias and also guaracha, son and salsa tracks, mainly Luciani's own compositions. This album also stands out for the vocals by guarachero Víctor Kiko Fuentes and Benny del Solar, the star of countless Peruvian tropical music recordings.

Reissued now for the first time, over 50 years after its original release, in 180g vinyl and including an insert with notes.

Italy has always exported its music to the farthest corners of the Latin world. Most of the Italian musicians that reached Peru gained temporary fame popularizing a mix of new songs and classics from Italy before returning home. Others decided to settle indefinitely in Peru, leaving behind them a rich legacy comprising a music school and compositions of huaynos, waltzes, marineras and cumbias that are part of the Peruvian popular song book today.

This is the case of Luciano Luciani Mazzuchelli, who migrated from Tuscany to Lima in the early sixties to work at his uncle's Italian restaurant. His passion was music. In 1964 he made his vinyl debut on a small local label, recording two ballads of his own. Encouraged by this success, he wrote a couple of tracks, being one of them recorded by one of the best trios in the history of música criolla, Los Morochucos, and included in their LP “Los Morochucos en Hollywood” (1965).

Next, the Italian ventured into cumbia, a rhythm that was beginning to expand internationally from the Atlantic coast of Colombia. With this new sound he composed a couple of songs, accompanied in one of them by the Peruvian ensemble Eulogio Molina y su orquesta in 1966 on a record that was also distributed in neighboring countries. Showing versatility, he also adapted classics of Andean music to this Caribbean beat.

After a couple of sabbatical years, he returned to music in 1968, leading his own orchestra, which performed under the name Luciano y sus Mulatos, joining a generation of tropical groups such as Pedro Miguel y sus Maracaibos, Los Totos and Los Ribereños. A hit single with the cumbia ‘Cusqueñita’ and the guaracha ‘El solterón’ was his first release on the record label MAG and preceded his first LP: “Mulata vamos a la salsa”. In the second half of 1970 he recorded the cumbias ‘Los palmares’, ‘Morenita’, ‘Metro’, ‘Fiesta en corraleja’ and ‘Mi chiquita’, followed by the guarachas ‘Estoy enamorado’, ‘Cumbiamba’ and ‘Maruja’, besides ‘Oye mi son’ and the salsa ‘Mulata, vamos a la salsa’. All of these songs, together with the pair of tracks from the 1968 single (‘Cusqueñita’ / ‘El solterón’), made up this first album by Luciano Luciani y sus Mulatos, released in late 1970, taking its title from the one salsa track on the LP.

Comprising mainly Luciani's own compositions, this album also stands out for the vocals by guarachero Víctor Kiko Fuentes (‘Mulata vamos a la salsa’, ‘Los palmares’, ‘Fiesta en corraleja’, ‘Maruja’, ‘Mi chiquita’), whose talents were praised at the time by Benny Moré, who became a legendary figure when he recorded ‘Mambo rock’ with Alfredo Linares. The other outstanding vocalist is Benny del Solar, singer and güiro player, the star of countless Peruvian tropical music recordings, who later migrated to Ecuador.