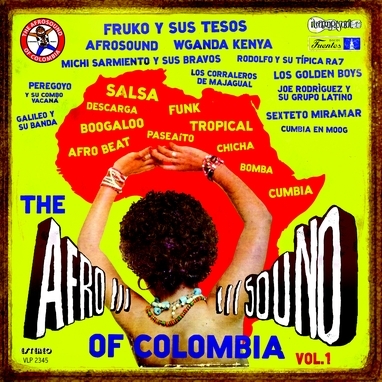 The Afrosound Of Colombia Vol 1

Many songs reissued for the first time.

Over two and a half hours of funky, hot Afro-influenced tracks from the 60s and 70s golden period of the seminal Discos Fuentes label in Colombia. 43 dancefloor hits provide an irresistible mix of genres: salsa, cumbia, boogaloo, tropical funk, chicha… To understand what this compilation refers to as the Afrosound of Colombia, you have to acknowledge the profound role of African cultures in Colombian life and music. The story of the Afrosound is a tale of transformation. It tells of the enslaved African peoples who were taken to Colombia, who mixed with Europeans and indigenous inhabitants (by force or choice), and were eventually set free, as well as the escaped cimarrones (maroons) that lived in palenques (fortified settlements) and continued their own traditions. The Afrosound sings of a double Diaspora, first the trek in chains during the infamous Middle Passage from the Motherland of Africa to the so-called New World, then much later, the migration from the plantations to the cities. This release deals with the unique sounds produced as a result of the inventive mixing of pop and roots that took place in the urban confines of the Discos Fuentes studios, far from Colombia’s coastal regions. For our purposes, the invented term Afrosound can serve as the title of a thrilling and sometimes odd soundtrack that chronicles the diffusion and evolution of the musical culture from those coastal regions as it was brought inland, where it was translated, simplified, mass marketed, manufactured, modernized, “whitened”, globalized, recycled, and then sent back to the world at large, disseminated from the cities of Medellín and Bogotá, where the major bulk of the music production industry resided in the 50s through to the 70s. To tell the story of Afrosound, you not only have to know about the influence of Afro- Antillean music and indigenous Colombian tropical coastal genres, you also have to know something about the history of Discos Fuentes and musician/producer Julio Ernesto “Fruko” Estrada. Suffice it to say that the coastal area of Colombia shares in common with other areas in the Caribbean Antilles a certain tropical mix of sensuality and syncopation that somehow manages to combine joy and pain in a transporting wave of rhythm and melody that is food for the soul. The tracks on this compilation were chosen from the vast archives of Discos Fuentes because they are fun, funky, unexpected, crazy, hot. They are not necessarily your ‘typical’ or well known cuts, though the performers might be familiar and in some cases are quite popular today outside of Colombia due to an increasing awareness of the country’s exciting musical heritage. The title of this compilation comes from one of the Fuentes bands, Afrosound, but here it’s taken more as a general term to denote the funkier side of the label’s prolific output in the 60s and 70s. The unifying factor for the collection is that the tracks all have something to do with African roots or influences in one way or another, and they mark a period of sonic experimentation, self expression, upheaval, rebellion and rebirth in the industry, nurtured by Discos Fuentes and its stable of musicians, producers, and engineers.