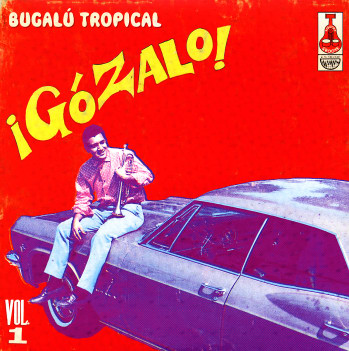 After a very long time researching the archives of the most important record labels of Peru, we present volume one of Gozalo!, a collection of this country’s best artists from the 60s and 70s. Peru is probably not a heavyweight champion of well known music like Brasil or Cuba, but with so many exciting bands and artists you would hardly believe! Names like Charlie Palomares, Mario Allison, Lucho Macedo, Al Valdez, Ñico Estrada, Los Hiton’s and many more, were experimenting with foreign sounds and rhythms such as jazz, pop, boogaloo and soul, and giving them their very own and unique Peruvian flavour.

During the 1930s, dance bands in Peru were heavily influenced by their Cuban counterparts. The same thing happened in other places such as Dominican Republic, Panama, Mexico, Venezuela, Colombia, Puerto Rico and the rest of the Caribbean. Those were the days of the American big bands that came about during and after the Second World War. It wasn’t until the 50s, however, that Tropical, as music from the Caribbean was known, became a complete socio-cultural phenomenon in Peru. An entire legion of amazing musicians erupted: singers and bands who delighted their audiences playing mambos, guarachas, merengues and boleros. Many of the bands recorded for local record labels such as El Virrey, Sono Radio and MAG. During the 50s, Peruvian bands took on guaracha and other Cuban rhythms, incorporating jazz, fox trot, twist and rock & roll influences. Something similar took place in the 60s: musicians incorporated jazz sounds instead of complying with New York’s strict guidelines. According to Alfredo Linares, the fact that we sounded different from New York was basically because of the jazz influence we stamped into our sound… It was a musical concept we had a grasp on that ended up being beneficial to defining our style. Before boogaloo came onto the scene and the generation’s takeover was solidified, the type of Latin music being heard in New York during the early 60s consisted of mambo, pachanga and cha cha cha – and it was the typical Cuban orchestra or brass band that monopolized audiences. Nonetheless, despite of the success of Cuban music and the prestige that some musicians gained, Puerto Rican and Cuban communities continued to be looked upon with uncertainty by the English-speaking population. In New York, the lack of housing forced recent arrivals from Puerto Rico to move to the Bronx, where little by little a new community was formed. Music calmed moods and broke down racial barriers amidst a time of social agitation. Blacks and Latinos not only shared common frustrations, but musical preferences as well. These were times of change. Without leaving their Latin-influenced side behind, these youths assimilated soul and rhythm & blues. They discovered the Supremes, Joe Tex, The Temptations, James Brown, Wilson Pickett, Marvin Gaye and other Motown stars. A continuous crossing of cultures began, creating an addictive mix of striking, revolutionary sounds. Compelled to create a new rhythm that would identify itself with el barrio, they managed to match the success reached by genres that dominated the market thanks to a hybrid style that would rule the dance floors into the late 70s. Boogaloo, along with its siblings shing-a-ling and Afroloo, had been born.