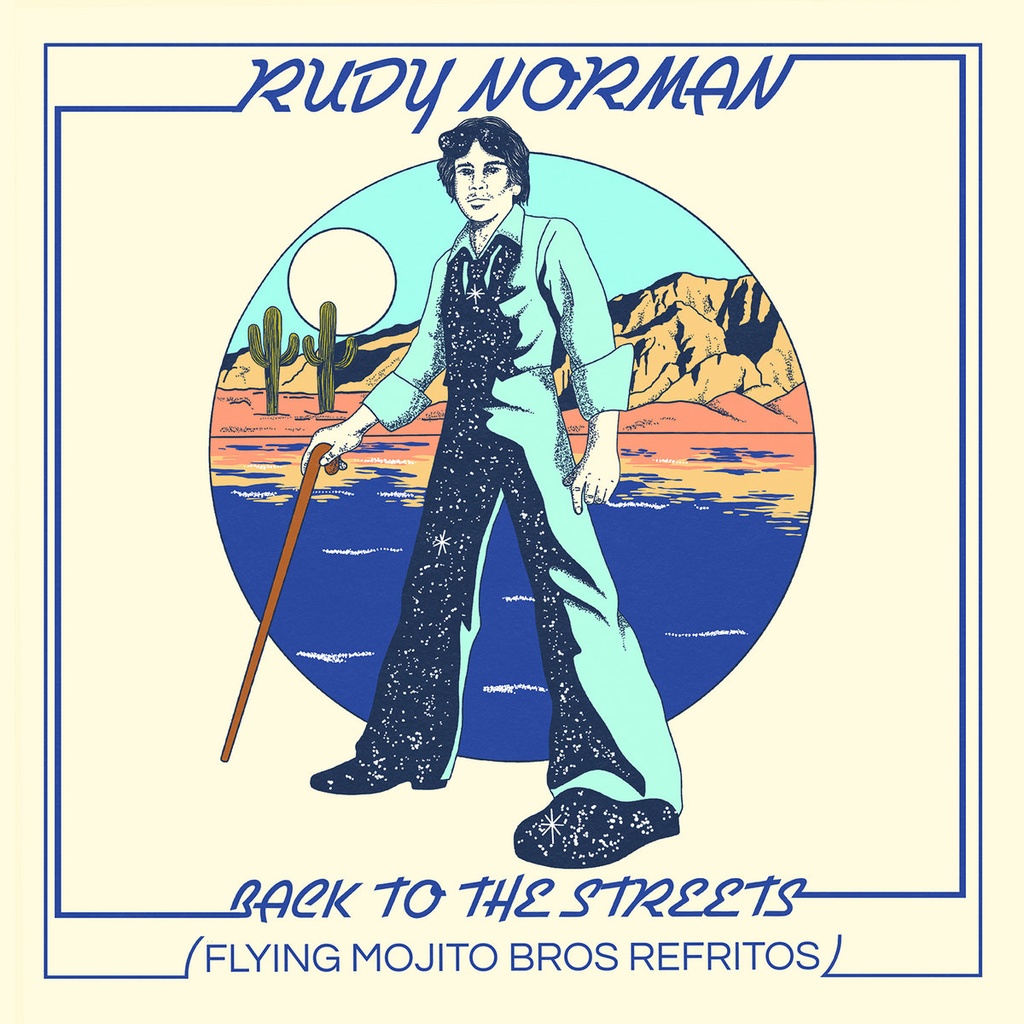 A1) Back To The Streets (Flying Mojito Bros Refrito)

A2) Back To The Streets (Original)

B1) Back To The Streets (Flying Mojito Bros Dub Refrito)

B2) Back To The Streets (Flying Mojito Bros Refrito Radio Edit)

It’s a big one. Americana disco wizards the Flying Mojito Bros have worked their magic on Rudy Norman’s cult AOR track, and in so doing have, in the words of Rudy himself, “brought Back To The Streets to the future”.

For the first time, Back To The Streets (1980) finds itself remastered on 12” vinyl alongside official remixes commissioned by the artist, in a welcome new package that will please lovers of glistening disco reworks as well as those seeking a vinyl copy of the original track.

The sun-baked electronic disco ‘refritos’ arrive in three versions to suit all occasions – straight up, extended dub and radio edit – and no doubt have the potential to resonate with the huge worldwide desire to get back out there and bond meaningfully with our fellow brothers and sisters in public.

It looks the part too, with Flying Mojito Bros also directing a colourful and cosmic reimagining of the original cover art via illustrator Nick Potts, reflecting the bros’ transportation of Rudy’s West Coast vibes into one of their own Southwestern desertscape settings.

Back To The Streets has long been a cult crossover disco track, known and played by notable diggers on the scene such as DJ Shadow – in addition to the exquisite opening solo rhodes lines becoming a choice sample for underground producers.

It’s since come to greater attention later in its lifetime, thanks to the inclusion in two compilations by highly-venerated imprints: First Night Tales Presents After Dark: Nocturne (2015), compiled by none other than Bill Brewster, who literally wrote the book on DJing and DJ culture – and latterly on Seafaring Strangers: Private Yacht (2017), a collection released by Numero Group, who do so much to bring cultural rediscoveries to wider audiences.

Here’s what Rudy has to say:

“So here it is, decades later and Streets is still out there in the universe.

I reached out to Flying Mojito Bros to ask if maybe they could work their magic on my track, thinking it was one of those shots in the dark.

Hell, I was happy just to hear back from them and even more so to find out they already loved Streets and even better yet that they wanted to work on my song.

Well FMB sure did work on it and came up with way more than I could've imagined. It’s a magic package of groove and rock‘n'roll, bringing Back To The Streets to the future.

A wholehearted thank you for delivering a kickass track!”

Think the first summer of love meeting the second – Crosby, Stills and Nash at the Haçienda, The Doors at Shoom, The Orb at Woodstock.

The acid cowboys – producer/musician Ben Chetwood & DJ/digger Jack Sellen – have found the DJ sets of their re-edits with trippy visuals to be a hit among party people all over. Their disco-house-gone-country has turned party people loose in clubs, parties and late-night festival tents at Glastonbury, Bestival, Port Eliot, Pikes Ibiza, Austin City Limits and beyond.

Their take on the release:

“We can’t tell you how ace it was receiving an email from Rudy out of the blue a while back not only saying he digs our work, but asking us to remix Streets. One of those dope moments that you could never predict happening but serves to remind us one of the amazing reasons why we do what we do – to make connections with people.

We love the way the timing of this release has fallen at the time of mankind returning to the streets to physically reconnect. It’s gonna be emotional playing this out the first time to a dancefloor, let us tell you!”

★ Luke Solomon (Defected) – "Awesome to see this come out"