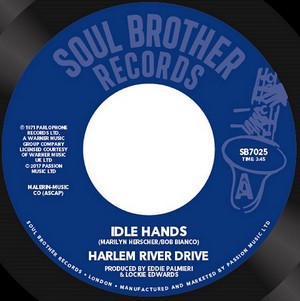 Harlem River Drive is a group that launched the careers of Eddie and Charlie Palmieri, two giants in the field of Latin fuelled jazz fusion. Comparisons have been made with the work of groups they inspired including War and Funkadelic from first recording and performing in the early 70s. Both “idle Hands” and “Seeds of Life” come from the group’s self titled debut album released by Roulette in 1971. Drums are by one of the most prolific players of the day Bernard Purdie (Gil Scott-Heron, Aretha Franklin, Roy Ayers among many more), another high profile musician Cornell Brown on guitar with Randy Brecker on trumpet for “Seeds Of Life”. Both tracks have been released before on 7” vinyl, now extremely rare, “Seeds Of Life” appearing here on 7” for the first time in full length version