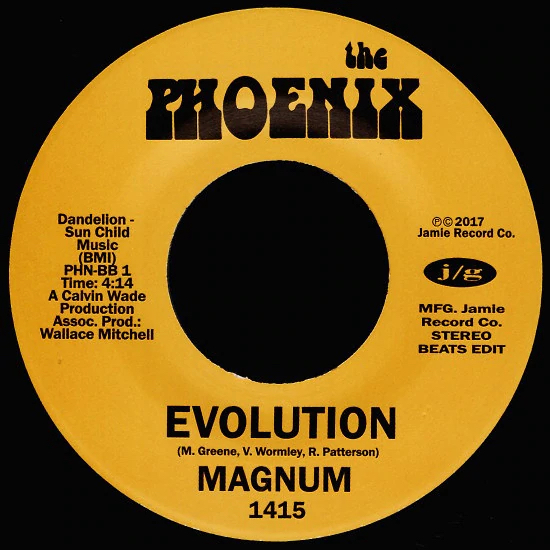 Magnum, Evolution (Beats Edit) b/w It's The Music That Makes Us Do It

Evolution (Beats Edit)
It's The Music That Makes Us Do It

Latin-tinged Southern California funk band Magnum has seen its reputation blossom since the original 1974 release of their LP, “Fully Loaded.” An exuberant band of individually talented musicians working in an expansive and comfortable environment, they give a loose funky overlay to a grounded R&B and Jazz sound that included a variety of instruments, including whistles, that lift the music to an exciting, hypnotic groove. Based in San Pedro Bay, California, Magnum originally consisted of brothers Michael Greene (muilti-instrumentalist and youngest in the group) playing piano, organ, percussion and vocals and Harold Greene on bass; with Kevin “Cornbread” Thornton on lead and rhythm guitars and doing the arrangements, Vance Wormley on trombone, organ, piano and percussion and with George Chaney on congas and bongos; Thurron Mallory, playing tenor, alto sax and electrified percussion, joined six months later and brought with him the rest of the Magnum Horn ensemble with Lamont Payne on trumpet as well as percussion. The band stuck together performing in Southern California for a couple years after the release of “Fully Loaded,” once the opportunity came to perform with other artists, Magnum disbanded and the members moved on to other projects.