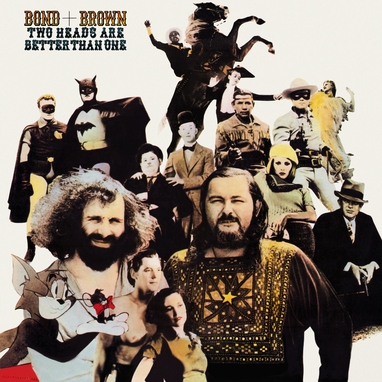 Bond & Brown, Two Heads Are Better Than One

A1 Lost Tribe
A2 Ig The Pig
A3 Oobati
A4 Amazing Grass
B1 Scunthorpe Crabmeat Train Sideways Boogie Shuffle Stomp
B2 C.F.D.T. (Colonel Frights' Dancing Terrapins)
B3 Mass Debate
B4 Looking For Time

Graham Bond and Pete Brown need little introduction. Bond was a key figure of the early British jazz and R&B scenes. His Graham Bond Organisation recorded several albums and the band’s members (Jack Bruce, Ginger Baker, John McLaughlin and Dick Heckstall-Smith) achieved massive fame in their later careers. Pete Brown was a Cream/Jack Bruce collaborator. After being thrown out of his own band, Pete Brown & His Battered Ornaments, he formed another group: Piblokto! Dangerous habits, mental health issues and little commercial success were seriously affecting their careers on the verge of the 70s and a series of unfortunate events made Graham Bond and Pete Brown find themselves in limbo. They then decided to team up for a new band project, resulting in the recording of ‘Two Heads Are Better Than One’ in 1972. The album included songs like ‘Lost Tribe’ and ‘Looking For Time’ as an attempt to express the fact that Pete and Graham were now on the outside of the rock scene in the early 70s or ‘IG The Pig’, dedicated to a dubious record label head after the band found out their fee was not going to end in their bank account… The album is a brilliant multi-genre crossover celebration: bluesy rock with a funky twist, jazzy prog passages… It was Graham Bond’s last album and probably his best work.