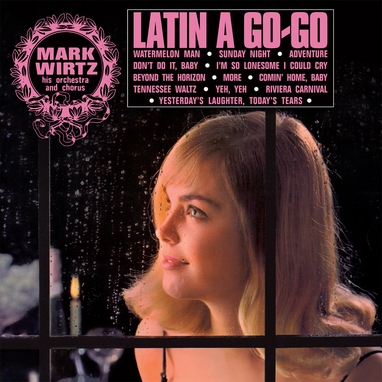 The Mark Wirtz Orchestra And Chorus, Latin A Go-Go

A1 Watermelon Man
A2 More
A3 Comin' Home, Baby
A4 Sunday Night
A5 Riviera Carnival
A6 Beyond The Horizon
B1 Tennessee Waltz
B2 Adventure
B3 Yeh Yeh
B4 Don't Do It, Baby
B5 Yesterday's Laughter Today's Tears
B6 I'm So Lonesome I Could Cry

First vinyl reissue of this 1966 easy listening/Latin masterpiece by Mark Wirtz, of ‘Grocer Jack’ and ‘A Teenage Opera’ fame and in-house producer for EMI at Abbey Road in the mid/late 60s. Presented in facsimile artwork and pressed on 180g vinyl.

Mark Wirtz’s most famous output was recorded during the mid/late 60s when he was working as in-house producer for EMI at Abbey Road. His ‘Mood Mosaic’ LP and the unfinished concept album ‘A Teenage Opera’ (a single off this LP, known as ‘Grocer Jack’, was actually released in 1967) provided Wirtz with an iconic status among easy listening collectors. However, his lesser known 1966 album ‘Latin A Go-Go’ is the one to have if you aim to hit the dancefloor. The title of this album may not be very original but perfectly describes the music inside. Think of wild cocktail parties in sunny California in the mid-60s, cosmopolitan hotel lounges in Copacabana or the hippest clubs in Swinging London and you’ll get a picture of what the perfect scenario for playing this LP looks like. However, it seems that only a few people needed this vibe in their average lives when the record was originally released in the UK, Netherlands and Spain (often under different titles and cover art) and copies have vanished over the years. 50 years after it was first released, it looks like the right time to enjoy again this masterpiece of ‘Latin a go-go’ music that includes just about every classic hit you could expect: ‘Watermelon Man’, ‘Comin’ Home, Baby’, ‘Yeh, Yeh’… It features the likes of Barbara Moore (from the legendary library music album ‘Vocal Shades And Tones’) on chorus vocals, Jim Sullivan (Lord Sitar) on guitar and the prolific