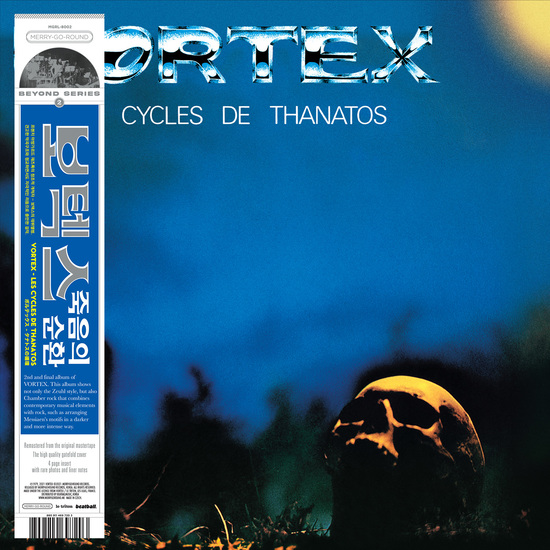 A1 God Is Good For You, John
A2 Prolégomènes
B Les Cycles De Thanatos

In terms of dense composition and excellent performance, as well as recording quality, is a masterpiece that far exceeds its predecessor, which had a somewhat hastily-made feel. If the previous album was filled with high-tension numbers based on impact sounds and repetitive motifs, this album demonstrates how the band can create complex structures with elaborate and delicate layers, while seamlessly weaving multiple motifs through a variety of instruments. In particular, the 25-minute title song, which occupies the entire B-side, is a work in chamber rock style that incorporates elements of contemporary music into rock, and expresses Messiaen’s motif in a darker and more intense way. The intro with various percussions including timpani and low-key heavy sounds is dark and abyss-like – reminiscent of (1979), a masterpiece of the Belgian chamber rock group Univers Zero, who were active at the same time as Vortex. In the second half of the song, amid the feast of various percussion instruments that stimulate both ears dazzlingly, it’s plain to see that the musical accomplishment of Vortex at that time had reached its peak.