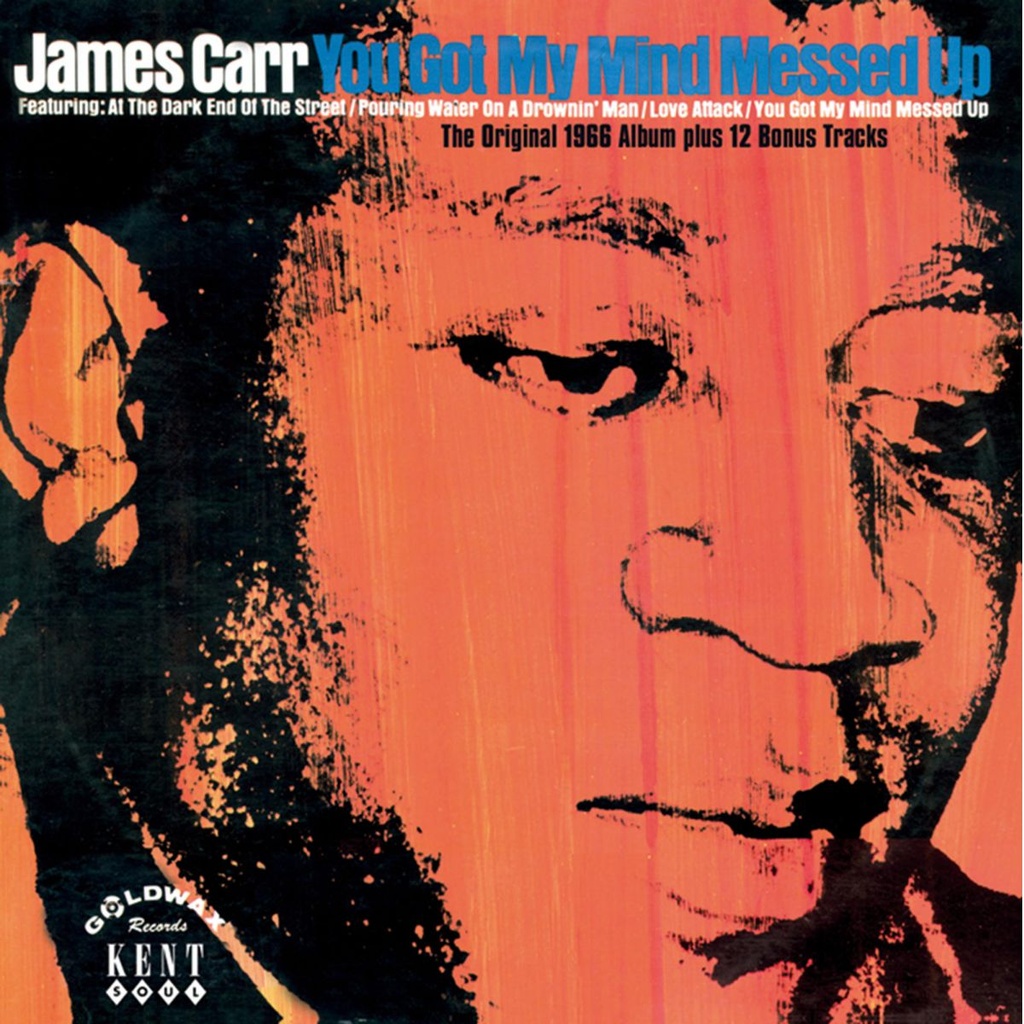 James Carr, You Got My Mind Messed Up

Quite rightly, Ace's acquisition of the Goldwax catalogue in 2001 caused much excitement amongst all hardcore collectors of Southern Soul. For years the label's relatively-small-but-undoubtedly-mighty catalogue of masters had been crying out for the kind of anthologising that its esteemed repertoire has always deserved. And we'd like to think that our first two CD releases - the James Carr complete Goldwax singles A's and B's, and the multi-artist Goldwax Story Vol. 1 - more than met the exacting criteria of this most obsessive (in the nicest possible way!) band of record collectors.

James' singles CD was, by some distance, Ace's biggest seller of 2001. And the "Story" is already among the best selling soul compilations we've ever had (Volume 2 is in the pipeline). The sales to date of both these albums suggest that we're on the right track with Goldwax. Now, to delight his admirers even further, we're continuing our James Carr reissue programme with an expanded version of JC's first Goldwax album, featuring the original 12 tracks that made up You Got My Mind Messed Up plus a further dozen gems that never saw the light of day at the time of recording - some of which, indeed, have never seen the LOD prior to the issue of this CD! (We also have a vinyl issue of just the dozen tracks that made up the original album, for those who've still not quite gotten to grips with this new-fangled CD thingy...)

As well as being a seminal soul 45, YGMMMU is - for this writer - one of the greatest soul albums of all time, period, if only for the fact that it includes both the title track and everybody's #1 deep soul selection The Dark End Of The Street. Most people I know would happily shell out for an album that included just these two tracks - myself included. But, of course, the remaining 10 cuts and the originally unissued material are all of a standard that makes purchase mandatory. James being among the top two or three soul singers of all time - equalled only, in this man's opinion, by his late brothers in soul Otis Redding and O.V. Wright - there's no way things could be otherwise.

Even if you have some of this material elsewhere, there's little likelihood that you'll have it in the kind of sound quality that it comes in here. For a start, virtually all the tracks have been mixed, from the original Goldwax multitracks, into stereo by obsessive JC fan and all-round good bloke Rob Keyloch. (The original YGMMMU album and the Goldwax 45s were all originally released in mono). I should stress that these tracks are "mixed" rather than "remixed" - Rob has faithfully followed the template of the original mono 45s, and in doing so he has created mixes that couldn't sound any more true to the music if Goldwax founder Quinton Claunch had fashioned them himself, in Sam Phillips' studios on Memphis' Madison Avenue, in 1967.

Then there's the uniform excellence of the bonus tracks - which, for once, really DO justify the epithet 'Bonus'. Several of these have previously only appeared on hard to find, expensive-if-you-do-find-'em Japanese CDs and vinyl, and some - like James' terrific version of Willie Walker's A Lucky Loser, are completely new finds from our audit of the Goldwax mastertapes. James' ?îouttakes' are as good as any, and better than most, released masters of most of his peers. The dozen presented here would stand up well as an album in their own right, and they may well surprise a number of people who didn't previously realise that James' repertoire also encompassed material from the Young Rascals and Mitch Ryder and the Detroit Wheels, as well as his own admitted hero - the aforementioned Mr Redding.

Outside of the studio James may have been a fully paid-up member of life's walking wounded club (and if you didn't already know this, the excellent sleeve notes by respected author Barney Hoskyns will tell you James' sad story in full). In front of a mike, though, he was always on the money and seldom less than unbeatable, whatever he chose to sing. (Sadly, we'll never know how he might have sounded doing the phone book, but you can bet it would have been a killer version!)

Here is one great singer, singing a pile of great songs. What else do you need to you know, other than that Ace will shortly be giving a similarly deluxe treatment to A Man Needs A Woman, James' sophomore Goldwax set?...