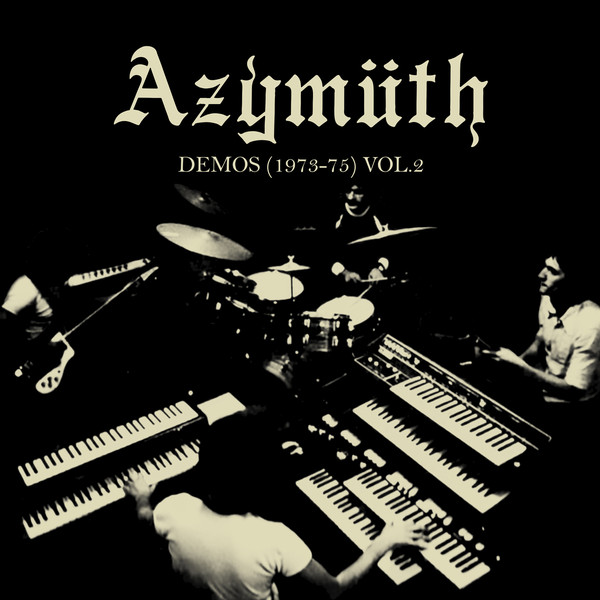 Since their debut album release in 1975, Azymuth have risen to rank alongside the world’s greatest jazz, funk and fusion artists. As young men in Rio de Janeiro, they stood out for both their exceptional talent as musicians, and their wild rock‘n’roll antics in the predominantly middle-class worlds of bossa nova and jazz. Their signature “Samba Doido” (crazy samba) sound ruptured the tried and tested musical structures of the day, resulting in what can only be described as an electric, psychedelic, samba jazz-funk hybrid.

Before they became Azymuth, Jose Roberto Bertrami (keyboards), Ivan ‘Mamão’ Conti (drums), Alex Malheiros (bass) and Ariovaldo Contesini (percussion) played backing band to just about every major artist in Brazil. Bertrami was also contracted as an arranger and songwriter at the biggest labels of the era: Polydor, Philips, Som Livre, and EMI being just a few. Azymuth’s name can be found on record sleeves by the likes of Jorge Ben, Elis Regina, Marcos Valle, Ana Mazzotti and countless others. But at the dawn of the seventies, fascinated by developments in improvisational music - from jazz in the US, to progressive rock in the UK and of course samba, bossa and tropicália on home turf - the energetic young group were inspired and ready to move forward. Any spare moment in which they weren’t in sessions and writing music for other artists, they would be carving out their own sound.

These previously unheard recordings took place between 1973-75 at Bertrami’s home studio in the Laranjeiras district of Rio de Janeiro. At the time of recording, there was nothing in Brazil, less the world that sounded anything like them, so perhaps it’s unsurprising that when Bertrami presented his demos to the record companies he had been working for, he was turned away, and told in effect that the music was ‘wrong’.

One of the demos ‘Manhã’ would be picked up by Som Livre and Azymuth released their seminal debut album in 1975. Throughout the late seventies and eighties the group released a series of now classic albums for Milestone Records, before taking an indefinite hiatus to pursue their individual careers.

When English producers Joe Davis and Roc Hunter arrived in Brazil in 1994 to record the first Azymuth album in over a decade, Bertrami dug out the demos which had sat virtually untouched for over twenty years. Joe recalls how he was “blown away by the freedom and intensity of the music, as well as the genius of the ideas musically.” Beginning a long and fruitful relationship, ‘Prefacio’ would be the first track Azymuth recorded for Far Out Recordings and was released on the Carnival album (1996).

Including ‘Manhã’ and ‘Prefacio’, only a handful of these demo tracks were ever professionally recorded and released, making this the first opportunity to hear many of these early Azymuth compositions in their raw, original form.

On every track the frenetic energy in the studio is palpable, giving the recordings a beautifully personal feel and a sense of the phenomenally creative vision Bertrami, Malheiros and Conti were realising at the time. Fifty years on, Azymuth’s earliest recorded music retains an ineffable, futuristic quality, standing amongst their most captivating and moving work.

Tape transfers by Roc Hunter (thanks to Simon Hitner)

Mastered by Daniel Maunick at the Sugar Shack, Lanark, Scotland

Mastered by Frank at Carvery Cuts

These are demo recordings and were not recorded in a professional studio, therefore the sound may differ from other releases by Azymuth. The best care has been taken in the restoration and mastering of this release.