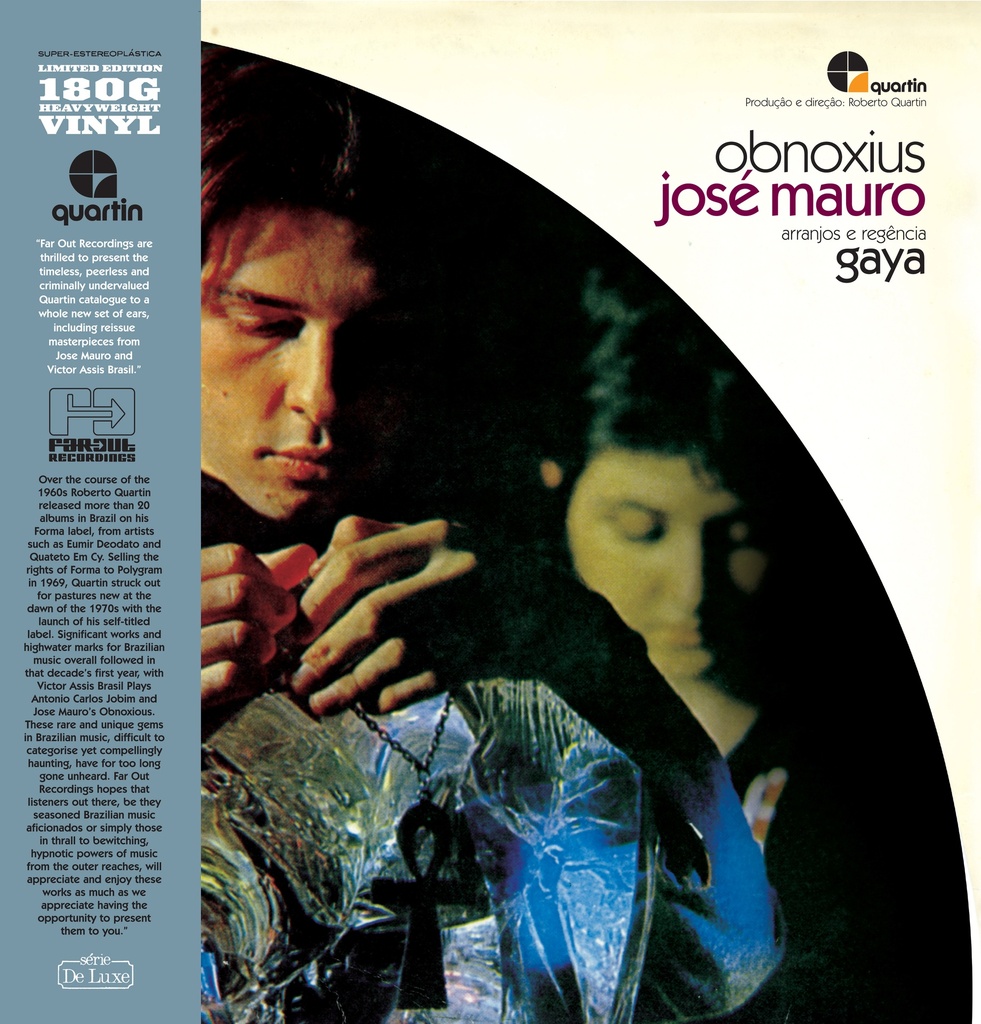 Far Out Recordings presents the peerless and criminally undervalued Quartin catalogue, beginning with the reissue of Jose Mauro’s forgotten masterpiece Obnoxius. Over the course of the 60s, Roberto Quartin released more than 20 albums in Brazil on his label Forma, by artists including the likes of Eumir Deodato and Quateto Em Cy. Selling the rights of Forma to Polygram in 1969, Quartin struck out for pastures new at the dawn of the 1970s with the launch of his self-titled label. Significant works and high-water marks for Brazilian music overall followed in that decade’s first year, with Victor Assis Brasil Plays Antonio Carlos Jobim and the aforementioned Obnoxius. These singular gems in Brazilian music, difficult to categorise yet compellingly haunting, have for too long gone unheard.

Today, very little is known about Jose Mauro and as a result those searching for some kind of insight on the man behind the music must attempt to glean what they can from the music itself. One rumour claims he died in a car accident shortly before the album’s release, a fact that could have lent his brief musical career a touch of mythology were it not for how scant the details concerning any other aspects of his life are.  The political turmoil from which the album emerged is significant also; recorded during an era of oppressive state censorship, the album, like all the Quartin catalogue, is the result of steadfast defiance in the face of a crushing military dictatorship. While many musicians of the era fled the country, preferring their prospects in the affluent, liberated USA, rebellious, young musicians like Mauro chose to stay and reflect their anger at the authorities through thinly veiled protest songs such as the stirring ‘Apocalipse’. Herein lies the basis for a more dramatic theory; that Mauro was in fact abducted by the military! Whatever the truth, the mystery remains unsolved, and all that remains is his bewitching music, all of which is composed by Mauro and Ana Maria Bahiana. Production on the record was cancelled after Mauro’s death and it was never sold commercially until its rerelease decades later.  What appeal does Mauro’s music hold to today’s listeners, forty-something years removed from its conception? Simply put, there is very little else that sounds much like it all. Take the title track of ‘Obnoxius’. A wholly singular piece of music, blending string-drenched melancholia with orchestral pomp, sunny psychedelic strumming with propulsive percussion, topped off with Mauro’s yearning vocals. The result is indicative of Mauro’s unique blend of sounds from Latin Jazz and samba to psychedelic folk and baroque orchestration.

Today, Obnoxius retains its strange, otherworldly appeal – A firm favourite amongst a small circle of deep diggers including Madlib, Gilles Peterson, Floating Points. Jose Mauro’s mournful and melancholic vocals create a dark, brooding atmosphere that stands in contrast to the usual joyfulness and high-spirited rhythm of the more prominent Brazilian music of the era. Despite this air of foreboding, Mauro’s confident baritones, chord patterns and sumptuous arrangements have the ability to induce in the listener an almost trance-like state of ecstasy. Mauro’s long hidden masterpiece, a complex and uniquely stunning work is being offered the chance to be heard by the wider audience it has always deserved. A second Jose Mauro release, A Viagem Des Horas, compiling more incredible tracks unreleased in Mauro’s lifetime, will follow, alongside other unreleased jewels from the Quartin catalogue, from the likes of Piri and Victor Assis Brasil…

All songs written by Jose Mauro and Ana Maria Bahiana