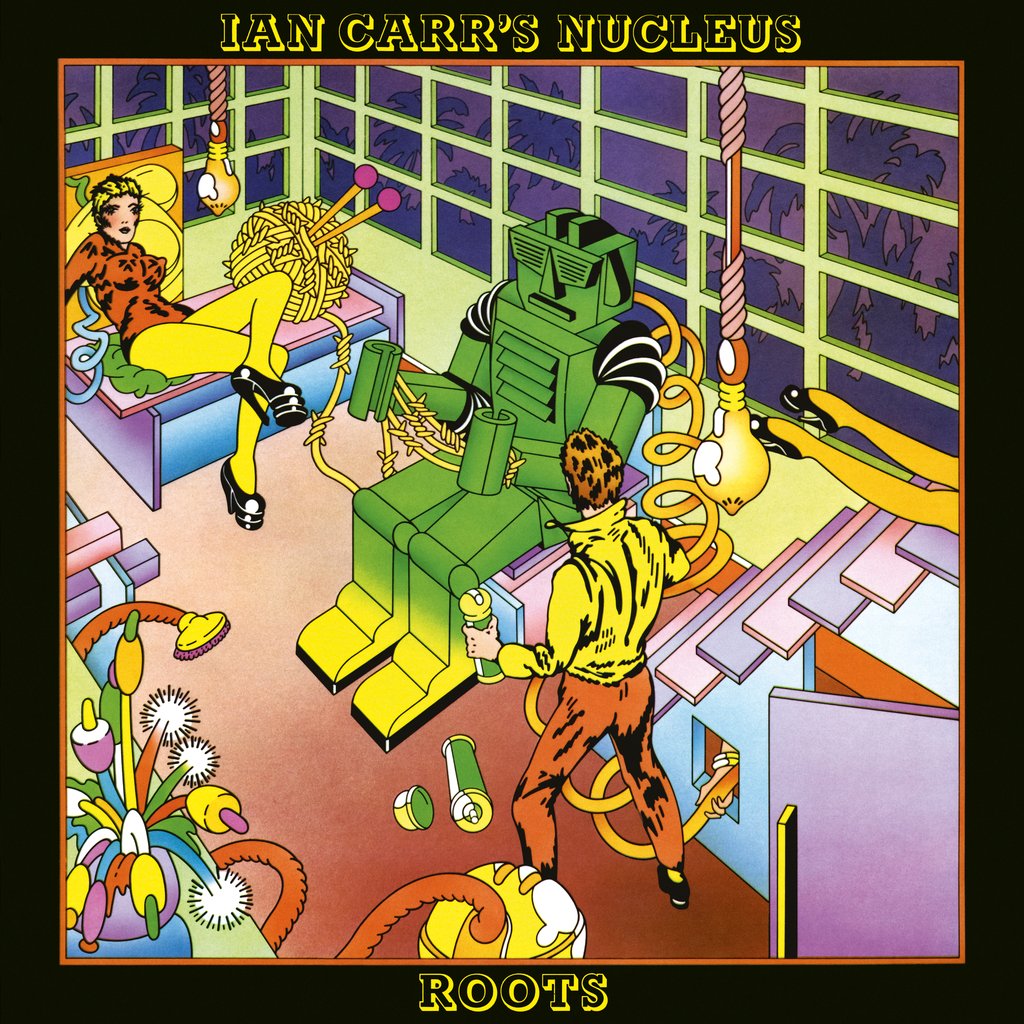 B4 Southern Roots And Celebration 7:44

What an unbelievable record. From the wild cover to the iconic breakbeats, Roots from Ian Carr’s Nucleus is one of the dopest albums we know. This is seriously thick, funky-prog jazz-rock heaven. Originally released on Vertigo in 1973, other than a couple of versions at the time for other territories, Roots was never re-pressed since so it’s gone on to become another one of those impossible to find records.

Maybe it was a little too out there for the time, but it’s aged very, very well indeed and this Be With re-issue, re-mastered from the original analogue tapes, shows off just why this deserves to be back in press.

Under bandleader Carr, Nucleus existed as a fluid line-up of inventive, skilled musicians. This constant evolution and revolution was all part of the continuous musical exploration and discovery that took jazz to new levels.

Working together with producer Fritz Fryer and engineer Roger Wake, the seven compositions by Carr, Brian Smith and Dave MacRae that make up Roots flirt with perfection, and Nucleus at that time made up of the cream of 1970s UK jazz with Brian Smith on tenor saxophones and flutes, Dave MacRae on piano and electric piano, Jocelyn Pitchen on guitar, Roger Sutton on bass, both Clive Thacker and Aureo De Souza on drums and percussion, Joy Yates delivering the vocals and of course Carr on trumpet.

The spellbinding title track immediately renders the album indispensable. Riding the illest of loping breakbeats, “Roots” is low-slung, doped-out heist-funk. An absolute monster. If it sounds familiar then that’s likely down to it being sampled by Madlib for Lootpack and Quasimoto’s “Loop Digga”, as well as by a whole host of beat manipulators. “Roots” conjures prime instrumental hip-hop / beat music, only 20 years ahead of its time. Truly, these are the roots. Through sinuous bass, twinkling keys and a hypnotic guitar riff, a smoky brass motif weaves its way into a gloriously deep haze around Carr’s solos. “Roots” is over 9 minutes long, but there’s not a single wasted second, not surprising given that this is a condensed version of an originally 40 minute long commissioned composition.

The soothing vocal fusion delight of “Images” follows. Meticulously constructed, with gorgeous flute work from Brian Smith, with Joy Yates’ silky vocals and Dave MacRae’s Rhodes never sounding better. The cool, driving “Caliban” closes out the first side. Originally the third movement in a four part commission to celebrate Shakespeare’s birthday it stands up on its own, all robust rhythms and blended brass. Keyboard colour and Carr’s trumpet are splashed across the funk drums and basslines (and there’s even some bamboo flute). This really is fusion: the elements of jazz and rock coming together in beautifully synthesis.

Side two opens in riotous fashion with the short, thrilling samba of “Wapatiti”. Next up, “Capricorn” forms a smoothed-out, jazzy constellation. Mellow and dreamy, its twinkling percussion and languid horns slowly build the vibe before head-nod drums and a killer bassline enter the fray. With a distinct heaviness that Black Sabbath would’ve envied, “Odokamona” is a venomous slice of riff-soaked jazz metal (yes, you read that right), elevated by Carr’s wah-wah horns.

The album closes with MacRae’s exceptionally cosmic “Southern Roots and Celebration”. Very much in conversation with Weather Report, it opens as a languorous, spiritual jazz of chiming keys and serene guitar that turns slowly, gorgeously into a mid-paced, brass-laced banger. It’s another sure-fire party starter and the sound of the band having a righteous blast, building an ecstatic chaos that ends with Yates screaming.

And of course we need to talk about Keith Davis’ cover for Roots. Perhaps the coolest record cover of all time? Certainly one of the most bonkers. Just your run-of-the-mill high-gloss, acid-tinged airbrush dystopian/utopian living-room party scene. Consider this your chemical flashback trigger warning.

Front-and-centre the hip-to-death green robot holds court with their giant ball of yellow barbwire wool, hooked up to… something(?) being teased out from under the stairs (probably best not to ask). A thoroughly zoned-out, long-legged Pop Art party-goer lounges half-plugged in to the painting behind her as a pair of legs flail into shot from the the top of the stairs opposite. We won’t even begin to guess what the chap’s up to in the middle, but the view out of the windows is rather nice, and someone’s already got the hoover out ready to tidy up. All of the Nucleus sleeves are something special, but this particular one? Crikey.

This Be With edition of Roots has been re-mastered from the original Vertigo master tapes, Simon Francis’ mastering working together with Pete Norman’s cut to weave their usual magic with these wonderful recordings. The crazy cover has been restored at Be With HQ as the finishing touch to this long overdue re-issue.