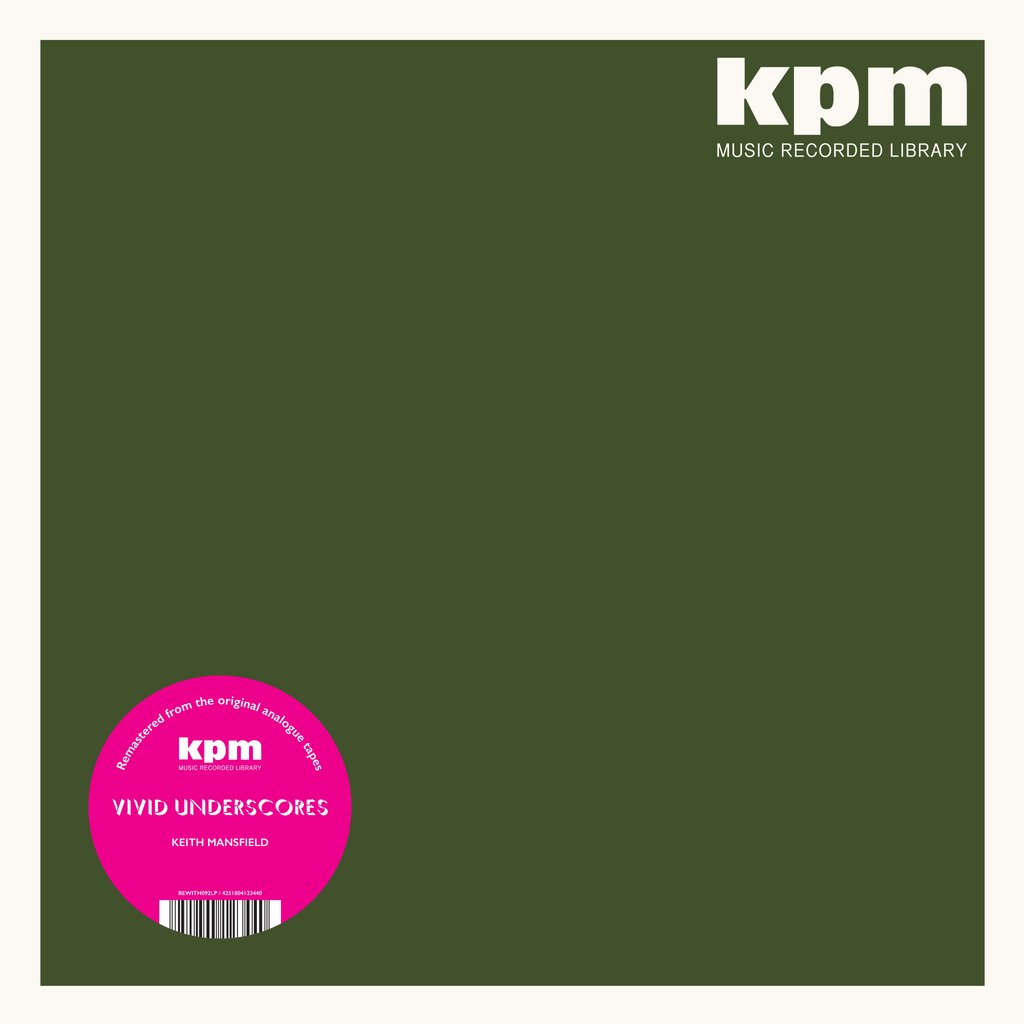 The creator of the romping tunes that became the iconic themes to the BBC’s Grandstand programme and their televised Wimbledon Tennis Championship coverage, Keith Mansfield was perhaps KPM’s most prolific artist from the mid 1960s right the way through the 1980s. As well as the sort of pop orchestral sound that is all over these classic library records, he could also turn his hand to raw, edgy rock and funk. Quentin Tarantino is a big fan, going as far as including some of Keith’s work on the soundtracks to Kill Bill and Grindhouse.

This is it. This is THE ONE for us: Keith “The Man” Mansfield’s Vivid Underscores from 1977. A sample freak’s wet dream and one of Be With Rob’s favourite ever KPM records. A must for fans of Brian Bennett’s Voyage (yes, THAT good). And no, we’ve no idea either why it took us this long to get round to tackling this monster of a record. But then again some things are worth waiting for.

Attention! Calling all crate diggers, DJs, beat heads, Hip Hop junkies, MF DOOM fans! Behold! Vivid Underscores makes sampling easy. Prepare to be up all night, every night, chopping, looping and splicing these endless grooves and spacey synths. The highlights are too many and too mind-blowing so we’ll pull out a few particular highlights. Trust us, this library LP is just jaw-dropping.

“High Velocity” sets the tone with its aggressive horns, wah-wah guitars, funky baseline and wobbly synth refrain. So good and so hypnotic that Memphis Bleek just had to swipe the ominous, frazzled intro for “What You Think of That” featuring Jay-Z. Also, for real drama, the 1985 Lakers retrospective “Return to Glory” used it to soundtrack the footage from the legendary game five of the NBA finals at the Forum. Heady days. “Crash Course” - Stetsasonic horn refrain? Beautiful - jazzy chase-funk, amazing warm keys, percussion and funky horns - all action.

The more restrained “Matter Of Urgency” is an utterly amazing, brass-heavy underscore. The grandiose, uplifting “Dawn Of Aquarius” still sounds like the future with its tense, thundering drums, killer bassline and swirling synths. Version II loses the drums and percussion but is no less startling. “Staying Power” closes the first side with a relentless, pounding groove which *will* snap your neck. Be warned.

“Trucking Company” is a pacey, synth-and-string masterpiece and its accompanying parts (a–c) mess with the formula to great effect. Part (a) adds echo delay to really dazzle and part (c) plays the breezy, beautiful middle section without the tension. “Hot Cargo” and “Espionage” are both tense spy-funk themes par excellence. “Interplay” is a quiet killer, with flutes over a glistening piano refrain just waiting to be looped. The intro to the menacing “Omen” might’ve been sampled by 7L & Esoteric for their classic “So Glorious” but the entire 5 minute track is a mini-drama masterpiece, one only Mansfield could create.

Even though its a mix of short themes in-and-amongst longer, full-length tracks, Vivid Underscores is still thoroughly listenable from start to finish. That’s not something that can be said of all library records and it still manages to serve as rich resource to keep even the keenest samplers busy for a while.

As with all of our KPM re-issues, the audio for Vivid Underscores comes from the original analogue tapes and has been remastered for vinyl by Be With regular Simon Francis. And as usual, the sleeve reproduction duties were handed over to Richard Robinson, the current custodian of KPM’s brand identity.